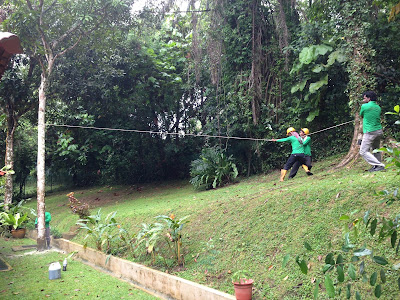 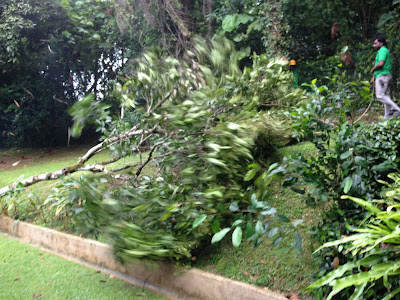 So now they are dragging out the remains of the tree in the pouring rain, while I sit typing away under my dry, undamaged roof. But I have work to do too. First, make the wet guys some hot, warming coffee. Then, I have to get a soapy cloth and fight my next battle. The hardest one, against the smallest enemy: the mould. Especially in this supposed dry season, that has proved wetter than any monsoon should be. The de-humidifiers I bought made a great difference, our house no longer smells like a bowl of mushrooms. But we need to stay vigilant. The terrorist black spots keep crouching up, and in, from every corner. I dream up an equally efficient crew to battle those, small as ants, dressed up in matching green T-shirts and yellow helmets, snapping pictures on miniature mobile phones, and calling tiny managers, before bringing out brushes that can sweep up mould from the tiniest of nooks and crannies. Sigh. Well, a girl can dream, right?
Posted by Karien at 18:56