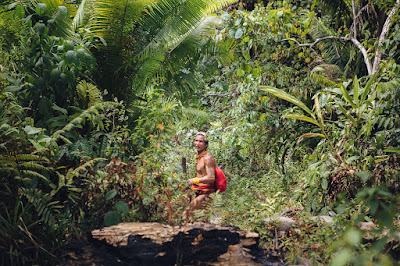 Before the end of the year with all its distractions arrives, I am trying to gather my thoughts on my visit to the Mentawai tribes of Siberut. My friend Andrea, who is a photographer, shared some of her amazing shots of the trip, and staring wistfully at her colourful work I wish I could go back. Stay longer this time, and bring my family too. Learn more. 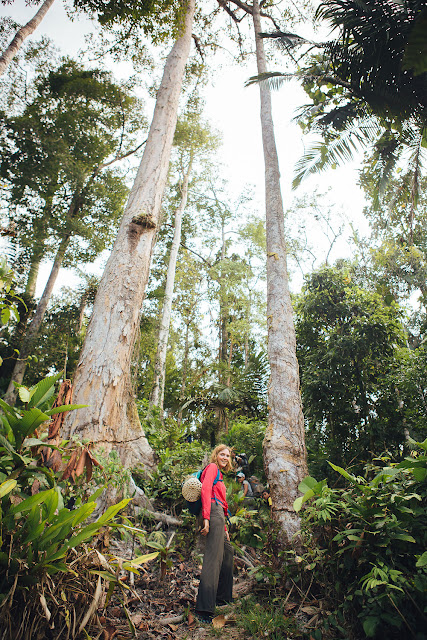 Of course I know, self-sufficiency is hard, but jungle life does seem simple and happy. I’d love to get back the state of mind I had when I was there. What can tribes like the Mentawai teach us? Can we simplify our own lives to make them less stressful and more sustainable? What - if anything - did the tribe get out of our visit? And how can we help protect their habitat and way of life? 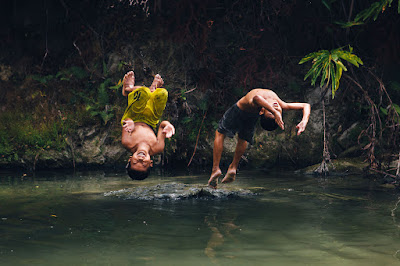 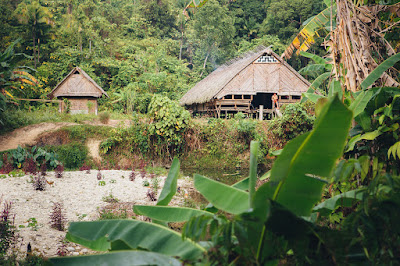 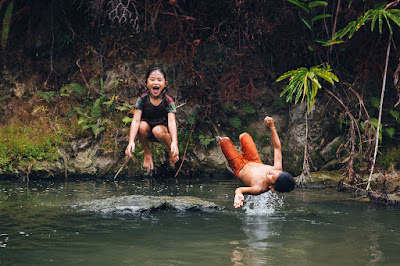 It sounds like a fairy tale; a place with no mobile network, no electricity, and no cash economy. A place where people only use what they find in the forest surrounding them and even then, ask permission from its soul before they take what they need. Yet that is what we found on Siberut. And the sense of community the tribe demonstrated, the way they live in harmony with nature, was an inspiration.

Getting there was a journey in itself. Slowly, gradually, I felt myself moving away from the modern world. From Bali I flew to Padang, in West Sumatra, where we boarded a ferry to Muara Siberut, a small town on the south of the island. As soon as our boat left Padang, it felt like we left ‘civilisation’. (i.e. we left the mobile network behind. I missed it like a sore tooth.) In Muara Siberut we met local guides Johan and Aman Ipai, and after a night in a guesthouse, we were ready to hit the jungle. Unfortunately, because of drought, the water level in the river was too low for a canoe; we had to travel by motorbike. On the back of that bike, with the driver balancing my too big backpack uncomfortably between his knees, I felt the excitement build in my stomach with every bump, leap and shake.


Shortly after we arrived in Aman Ipai’s uma in Buttui, where we would stay for a night before hiking on to the more remote area of Attabai, a delegation from the Sakkudei clan arrived. They had walked though the jungle for several hours to deliver bad news: one of our host Teu Reppa’s sons had passed away. They still wanted us to come, but needed an extra day for the funeral arrangements. Staying longer with Aman Ipai and his wife Bai Ipai – affectionately nicknamed Baboi or mother, was no disappointment at all, and soon enough the porters arrived to carry our bags up the difficult path to Attabai. Meeting my porter Monica, a lady about half my height and more than my age, I stared hesitantly at my big bag. I ended up giving away many of my possessions, but a sense of embarrassment of the amount of stuff we modern women seemingly need, continued to bother me throughout the journey. 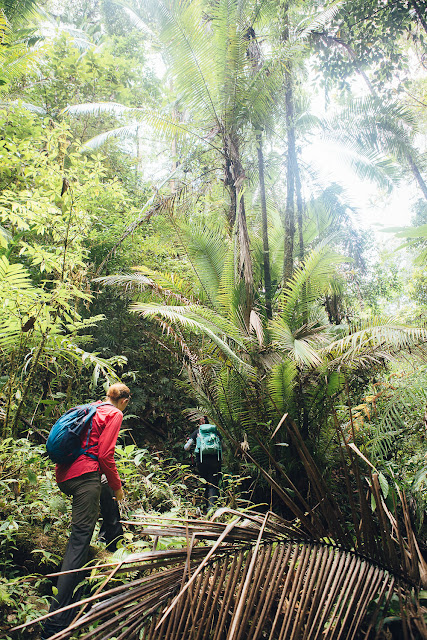 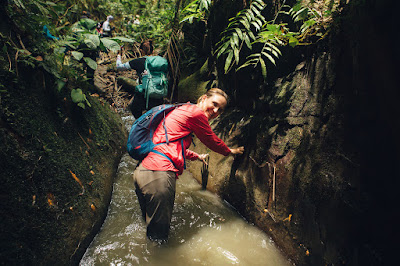 Buttui is close to a village and a rough motorcycle track, but Attabai can only be reached on foot; following Aman Ipai’s measured and steady steps we hiked through rivers, over a steep hill, and pathways that in more muddy conditions can only be navigated over wooden beams. When we arrived in Attabai, we were mindful of the mourning this family was in. Grief at the Mentawai is expressed physically, with a lot of hugging and loud wailing. We felt awkward at first, but soon learned that for the tribe, these emotions have a natural place in life, and are not something to be hidden or feel embarrassed about.

We explored our new home. Teu Reppa’s uma is further from the river, the wooden house stands in the middle of a dusty clearing. Pigs, cows and chicken roam around and under; the house is raised on stilts. There is no toilet there, you go outside and the pigs clean up after. The house consists of a large wooden patio with benches all around, a middle section where we will sleep, and behind that, the kitchen. In an uma, men and women sleep separately, men stay on the patio - sexual relations are not allowed (which is why families also have smaller wooden huts in the forest – for privacy). The uma is decorated with skulls of deer, pigs and monkeys. Along the patio fly wooden birds, which Johan explains are toys for the souls. The Mentawai believe everything has a soul, and many of the ceremonies we witness are to give thanks to, or ask permission from the soul of things they take from the forest. Spirituality is an integral part of Mentawai culture, and we observed many shaman ceremonies, knowledge exchanges and even clan members going into trance with a visiting soul (described here). As an atheist, most religious aspects perplex me if I think about them too deeply, but it is clear how interwoven the ceremonies are with Mentawai culture. One cannot separate culture from religion here. 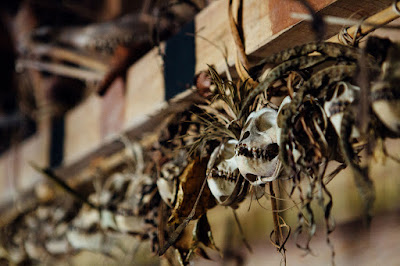 For a week we were part of the community and learned about their way of life. We played with the children, went hunting with the men – a tad relieved that our noise scared away all the monkeys. We ate a lot of sago. We witnessed the ceremonial slaughter of pigs and shared the meat with the tribe. We watched Aman Suri, one of Teu Reppa’s sons chop up a rotten sago palm trunk, and the children swarm to it as if it was a candy store. Sago worms! When you bite through the outer rubbery skin, the soft insides ooze creamy and sweet, like custard. Quite a treat.


Thankfully, some of the clan members spoke some Indonesian so I could talk to them. There is a clear divide amongst Teu Reppa’s sons. Two became kerei like their father; their children grow up in the forest. Two others chose to move to the village, like Paulus, who wants his children to get an education. I asked those kids about their plans for the future. Flora, aged twelve, was clear: she wants to be a doctor. Her cousin Adriana of the same age isn’t sure yet, she giggled a lot, and got teased by the others that her only ambition is to prepare sago. Little brother Patrisius who is nine, wants to be a policeman, which made his sister laugh: he is too naughty, she said. Elisabet was too shy to speak, and hid behind her hands. On Sunday afternoon the four of them walked home to their mothers in the village. Unsupervised for the three-hour walk; they are still jungle kids at heart.

Their cousins that don’t attend school can’t speak Indonesian or write; they are clearly at home in the jungle and proficient with a machete. Communication is more difficult, but time and again we saw that not many words are needed for humans to bond, as we massaged the elderly, dispensed medicine, sang songs and strung beads with the children – the smiles and hugs at our goodbye said it all.


Teu Reppa receives tourists like us in his uma to make some cash - to pay for school fees, medicine, tools and tobacco. Their last visitors came over a year ago and on the way back, Johan told us how much they enjoyed our visit; most guests are men, there for serious hiking. To have a group that reached out to the women of the tribe specifically was a rare treat and much appreciated. Still, I had mixed feelings. Apart from cash, we brought plastic waste, mobile phones with cameras and sugary sweets. Our empty water bottles were in great demand to be re-used by the tribe, but what would happen to them after they broke? Didn’t our mere presence threaten the authenticity of the tribe’s way of life? I put this complicated question in front of Johan. To him, the answer was simple.


Johan grew up in a fishing village on Siberut and spent several years with the tribe in Attabai working for Unesco. His father was one of the first local guides who took tourists into the forest in the nineteen nineties. Before that, the Mentawai tribes had been forced to assimilate, first by missionaries, then by the Indonesian government. Their artefacts were burned, and those who performed ceremonies or sported tattoos could end up in jail. Shamanism is still not accepted as a religion, everyone needs to select one of the five formal state religions of Indonesia. Only those tribes deep in the forest persevered.

When ecotourism grew, the government started to see the economic potential of their natural and cultural heritage, and in 1992 a large part of Siberut Island became a nature reserve – which is an important reason tribes like the Sakkudei can still live there as they do. In most parts of Sumatra indigenous tribes outside reserves have lost their habitat to logging and palm oil plantations. For Johan the answer to my question was easy: tourism saved the tribes.

To formulate a broader answer, I spoke to people from other organisations active on Siberut island: Suku Mentawai and IEF programs, that both work to educate people in the government’s resettlement villages about their own culture. Most people living there have lost touch with the forest way of life, and since employment options are limited in these remote villages, life is hard. People are keen to reconnect with their rich heritage, and Suku Mentawai’s programs show the benefits of education, and how it can be used to preserve traditional cultures. One thing is becoming clear to me: doing nothing and ‘leave these people be’ is not an option.


For a tribe like the Sakkudei it is impossible to keep living the way they have for centuries. There are many things threatening them in this modern world. They need an education; language, maths and the law, if they are to protect themselves from illegal logging, the government, or others that try to exploit them and their forest. At the same time, they need to be able to maintain their identity whilst they develop themselves – which is why locally run cultural initiatives like Suku Mentawai are so important.


I believe that as long as tourism remains small scale, and focused on empowerment rather than exploitation, it can help in preservation of indigenous tribes and their habitats. Cultural exchange can enrich both parties, as long as there is mutual respect. Even though there is much to admire about strong communities, they can at times be oppressive for the individual - one thing I’d like to learn more about myself is the position of women in the clan.


Through Whatsapp conversations with Johan, I know we are missed in Siberut - like we miss them. My life is still hectic, not as simple and sustainable as it could be. But every now and again I think of the Mentawai and try to keep learning. I hope to go back one day, and show my own children what life in the jungle can be like, now it is still there to see. This story is not over yet.

Photos by Andrea Galkova (https://www.andreagalkovaphotography.com)
Posted by Karien at 19:29 No comments: