Time can fly past in a blink, or take forever.

The first week everyone was tired after a year of school, and we lounged in the garden, the pool, played Carcassonne, read books and comics, had playdates, sleepovers and made a quick visit to the Zoo before our yearly membership ran out.

Then we went on holiday. A week in France, a week in Friesland. After that daddy went off to London for work while I spent a week in Holland with family and then another week in Friesland where the kids learned to sail and I could write. It was lovely in sunny Europe, in the hottest summer since the one I was born in, we saw old friends, family, and all too soon we had to board a plane to fly home.

When we got home we had four more weeks to go.

The first week we were tired. Visiting ‘home’ countries are not holidays for expats, they are an endless stream of social events where you try to squeeze everyone in, and at the end you have gained at least five kilograms and tell yourself: next year we’ll just go climb Mount Everest, that will be much more relaxing.

We rested. We hung about in pyjamas, uncombed, unbrushed. We read a lot of comics again, lounged in our pool, slept off the jetlag. The week after, which is now, they became bored and restless. They miss school, their friends that are mostly still traveling, and are in dire need for some routine. I am itching to get back to work, but the stolen moments in between tearing apart fighting kids are not really long enough to do some proper writing, more than a quick blog, so instead I take the kids out most days. Wear them out, so they won’t have enough energy left to hurt each other all the time.

Why do my kids fight so much? Linde has perfected her karate kick and Jasmijn is still nursing the scrapes from Tijm’s friendly tackles – on tarmac. If only they fought in silence I would leave them at it, but all of this is accompanied by ear-piercing shrieks from the girls and bone crunching growls from Tijm. (And their father still asks me why I don’t wear my hearing aid around the house…)

To tire them out I dragged them to the summit of Bukit Timah, Singapore highest hill, but since that is only 163 meters high, that did not take up more than a few hours. We went to the museum to cool off, cycled in East Coast Park. That one day I had to be out for work Indah took them to the Botanic Gardens on scooters.

Whenever I hope for a quiet few minutes I give in, in to iPads, Donald Duck comics and hagelslag sandwiches, things that I vowed to be strict about this summer. Because sometimes I just need a little peace. A little break. Sometimes I need to actually get something done, an email sent, a deadline made. Working from home is a very different scenario with three noise making machines present all day, still I have a novel and a charity book to promote, articles to write, events to organise. With barely enough brainspace to write a simple blog, let alone anything literary.

It has been eerily quiet the last half hour that I was writing this. Should I enjoy my peace or go check whether they finally did kill each other this time?

Two more weeks to go.
Posted by Karien at 23:24 No comments:

It is what everyone is saying to me at the moment: ‘Congratulations! You must be so excited!’

And every time someone says that I cringe a little inside and am briefly lost for the appropriate answer. Yes, of course I am very excited about my debut novel ‘A Yellow House’ coming out this summer. But at the same time I am terribly nervous. How will it be received? Will people like my writing? Will the narrative keep them gripped till the end? What if people will hate it, or worse, nobody will buy or read it.

And how will Singapore react to an Ang Moh writing about the controversial subject of migrant domestic workers? I might have spent the better part of the last five years researching the subject thoroughly; still, the trolls are probably out there sharpening their thumbs to pummel me down.

And it is not just about me. Little Maya, my protagonist, has become like another daughter to me, and just like I had difficulty letting go of my flesh and blood children last week when I sent them off to camp, I am apprehensive at releasing Maya into the big bad world. Will everybody love her like I love her?

Thankfully relief came in the form of my very first review last week and it was a good one - and not even written by a friend. Thank you Tripfiction for that boost of morale. After having spent the first part of the year promoting the ‘Our Homes, Our Stories’ book, it is a great relief to have a professional publisher for my novel and, even better, a publicist this time around. The local publicity will kick-off when the book hits bookstores here in early August, so Singapore, you will need to be a little more patient.

In the meanwhile, the book can be ordered online as an ebook or paper copy. In the UK, Netherlands, and other countries, you can just walk into any bookstore and they should be able to order it for you if they don’t stock it. And please, do remember to review the book on Goodreads and/ or Amazon.  (Do review whether you like it or not, but please let me down gently if you don’t..)

Follow it closely as there will be a book-giveaway coming up there soon! 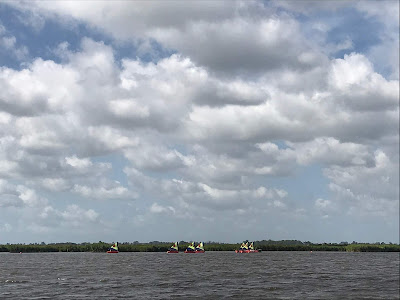 Usually I am a cold-blooded mother. When my kids went to school for the first time I did not shed a tear, I breathed a sigh of relief; finally some time for myself. I have never had any qualms about waving my kids off to school camp in Malaysia or Indonesia, or leaving them with grandparents for a second honeymoon in the Maldives.

I had been eying this sailing school in Friesland near my parents’ holiday home for years. Their live-in full week camps were from seven years onwards, and I counted down. Roel had to work in London so I visualised me, in the holiday home, with my laptop, writing - other people not only entertaining my children, but also teaching them to sail. A useful skill to have when your grandfather has a fleet of boats, yet no one in the family has the patience or didactic skills to teach you. Sailing camps on the Friesian lakes are a not-to-miss part of any Dutch childhood.

I have many good memories of spending weeks in ‘Valk’ boats, rain or shine (often rain in fact). I did mention to my kids, not too emphatically, the ‘sleep at home’ option the sail school offered. Of course two of them wanted to sleep there, so the third reluctantly agreed with my suggestion of ‘giving it a try, you can always call me if you really don’t like it.’ After all, she is only seven, and I am not that mean.

In the lead-up to the camp the kids were too busy being on holiday to even think about it, and I, mindful of the rainy camps of my childhood, spent my time ordering warm fleeces, wind and waterproof suits online. A week before the big day I started to get nervous. Weren’t they much too young to stay on their own for a full week? Our kids are the type that regularly get dragged to remote countries and homestays or whatnot without them batting an eyelid, so they just shrugged when I asked them if they were looking forward to the camp. 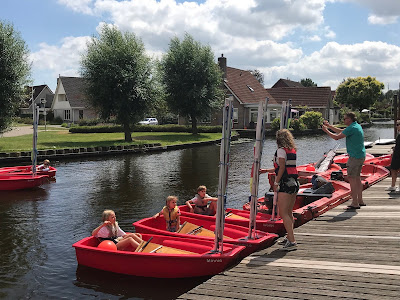 We arrived in Goingarijp on a hot sunny afternoon. The staff was friendly, welcoming and also smart enough to throw the kids into a boat and onto the lake straight away so the parents had little choice but to wave and leave. Thankfully I had been stupid (or cunning) enough to forget to pack sailing shoes for them. They were sitting nicely on their shelf in Singapore. So the next day I strategically had to dropped new ones off in the late afternoon.

That night I had not slept well. Not being used to being all-alone in a house (too quiet, yet with eerie noises – who makes these?) I couldn’t sleep, so plenty of thought had ran through my mind. What if they hated it? What if they got homesick? What if the temperature dropped and they wouldn’t think of putting on the jackets? What if they did not have enough clean underwear for the week, shouldn’t I stop by halfway to pick up some laundry? In short, I was being a terrible … mother.

I think you can imagine what happened when the kids saw me that afternoon. Nothing. They barely looked at me. They thanked me for dropping off the shoes and went about their business respectively playing games, reading comics, and having a shower. I needn’t have worried about the laundry – they hadn’t changed their underwear yet. After some begging from my side I got a quick hug and a kiss. A brief chat with the still friendly staff later I was back on my way. 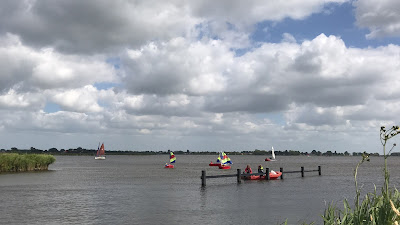 So did I leave them alone after that? Of course not. I did sleep like a baby, but the next day when Opa and Oma arrived we did go out on the motorboat to have a trip around the lake. Me, spying on my kids? Never! I did however take a cute little video of them in their boats. For daddy in London.