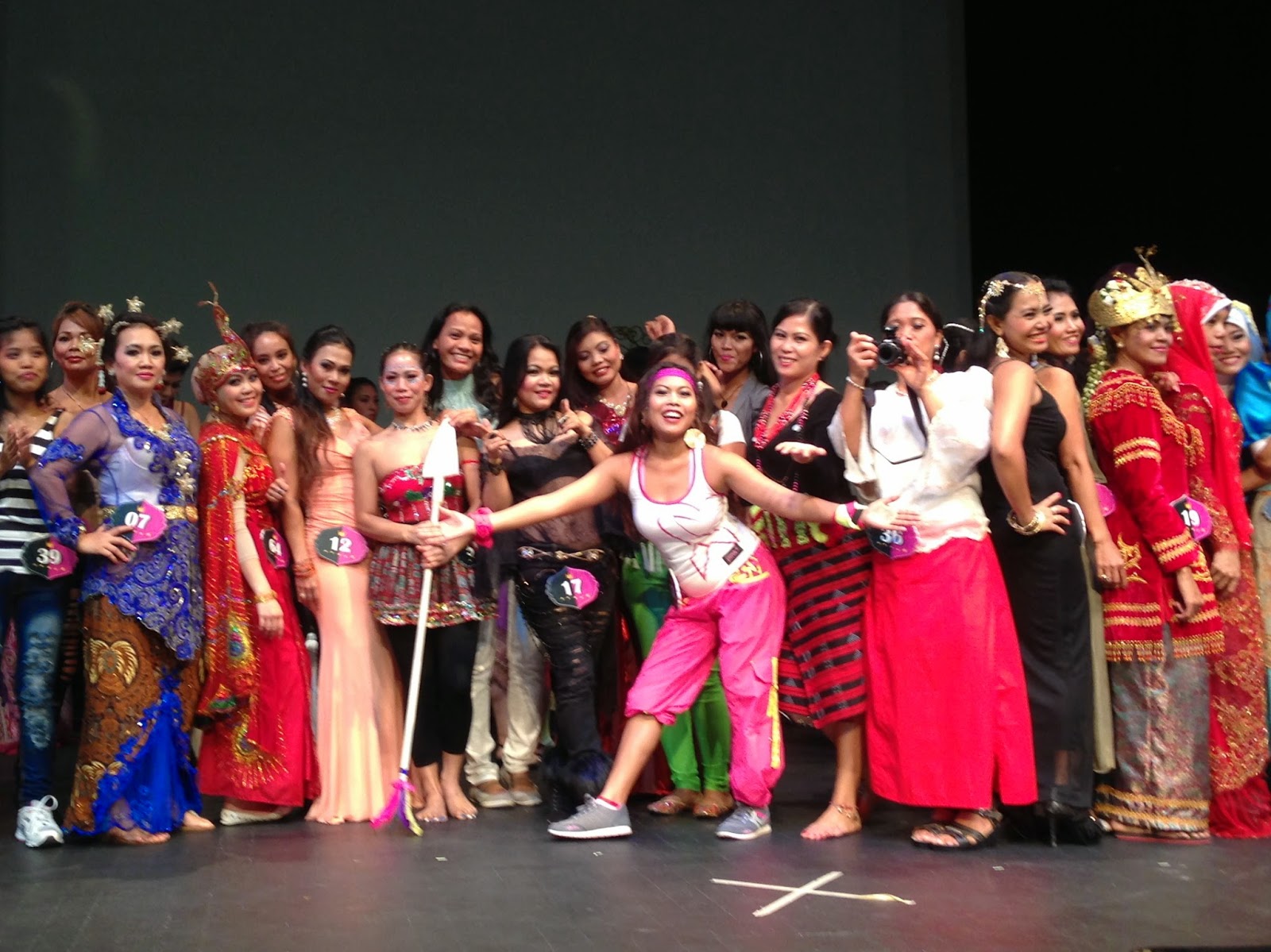 The X factor. American Idol. Idols. Britain’s got talent. Holland's got talent. Who does not know these? But Singapore’s got talent, who’s heard of that? The city-state is not known for it’s creative excellence. Does Singapore have talent?

This weekend, I had the honour of being a judge at the HOME Talent Pageant 2014. The pageant is open to a very special group of Singapore residents: Foreign domestic workers. These brave women leave their home’s behind to take care of other peoples homes overseas. They live in their employers houses, have long working hours, and often not even a weekly day off. No wonder HOME felt these amazing women deserved to be in the spotlights for once. 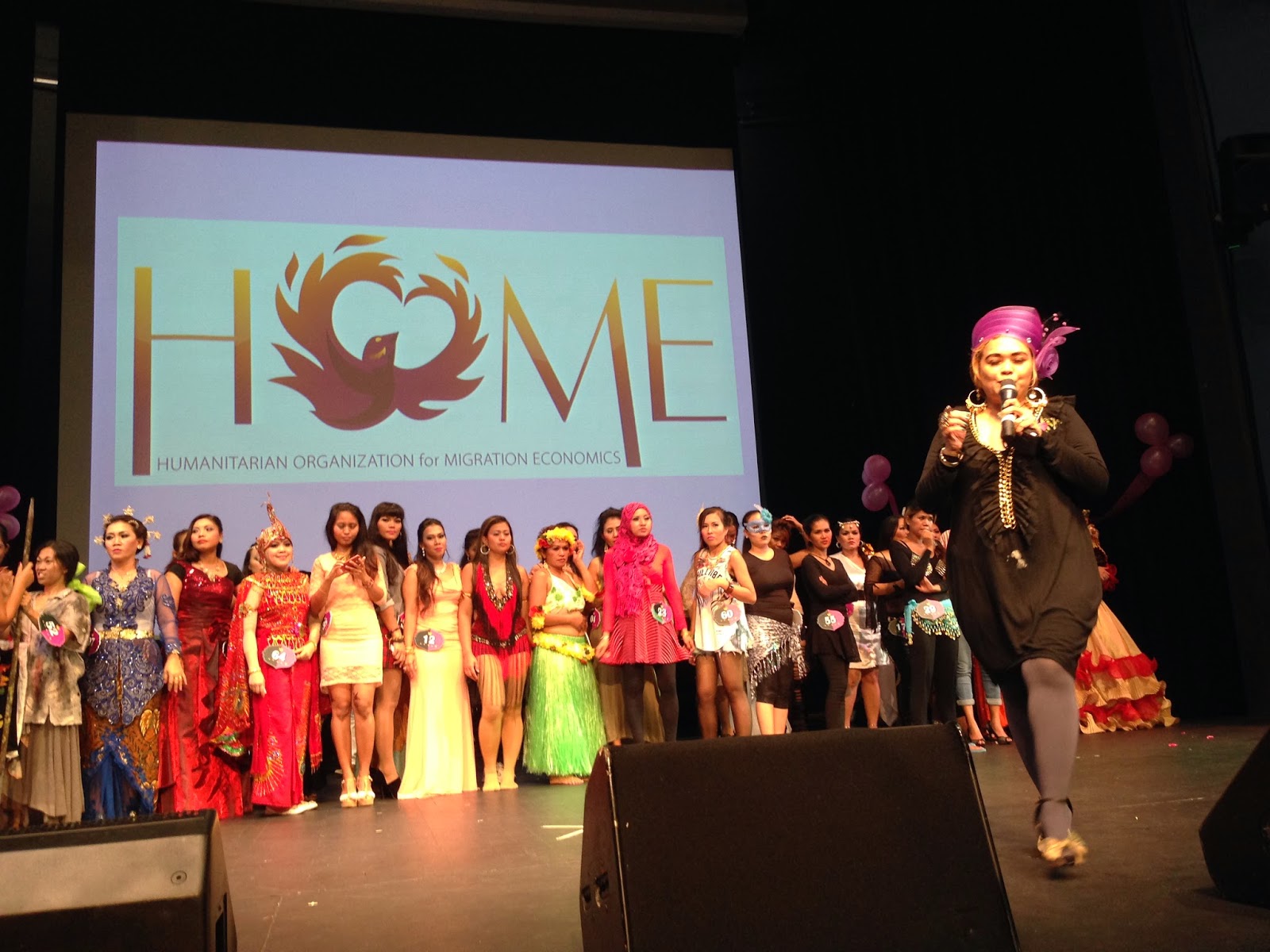 UWC’s Dover campus hosted the semi finals, the talent part of the pageant hosted by the amazing Pamela Wildheart. With the other judges I sat, slightly nervous, in anticipation of the day’s events. We would have to judge the contestants women from mostly Indonesia, the Philippines and India on attributes including stage presence, uniqueness, skills and emotional impact.

HOME’s talent pageant is not about body shape, age, race, weight. It is about inner beauty. Grace and charisma. Focusing on skills rather than beauty, the pageant hopes to encourage domestic workers develop their talents, and pick up life skills whilst working in Singapore. HOME Talent Pageant 2014 was organised by HOME domestic worker volunteers, giving them the opportunity to showcase their talents off-stage as well as on. 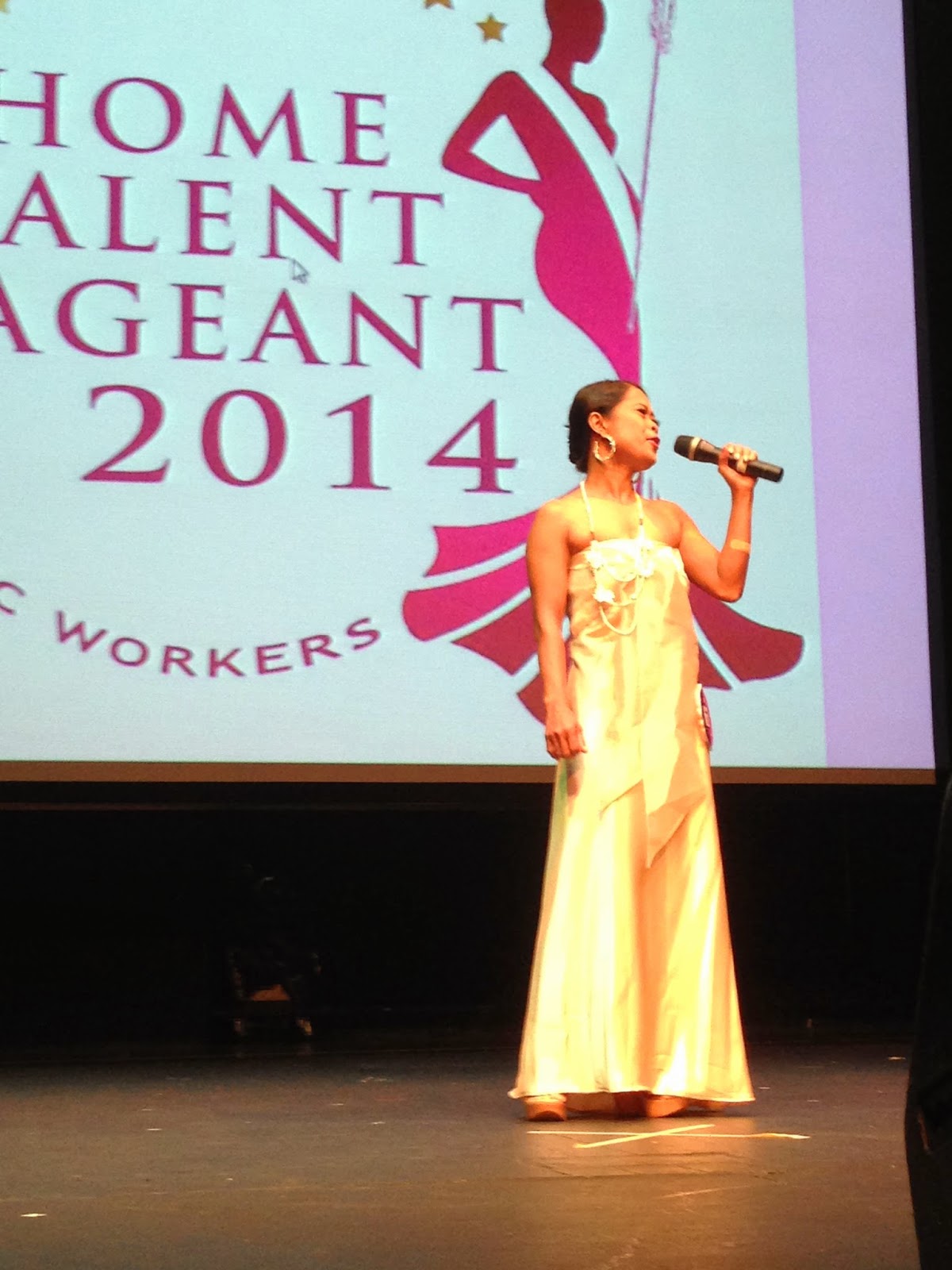 Embracing my inner Simon Cowell, I sat in eager anticipation of the contestant’s performances in the first category, singing. Just like on TV, not all the contestants managed to hit the right notes all the time, but dedication, beautiful costumes and poise more than made up for that. In the special acts category, we heard declamations about the strife of foreign domestic workers, percussion, even dressmaking and make-up skills were demonstrated on stage. Doling out points became harder with each new contestant. How do you compare a lady dramatically acting despair to one performing a traditional Indonesian chant, or one swirling a hula-hoop on her neck? 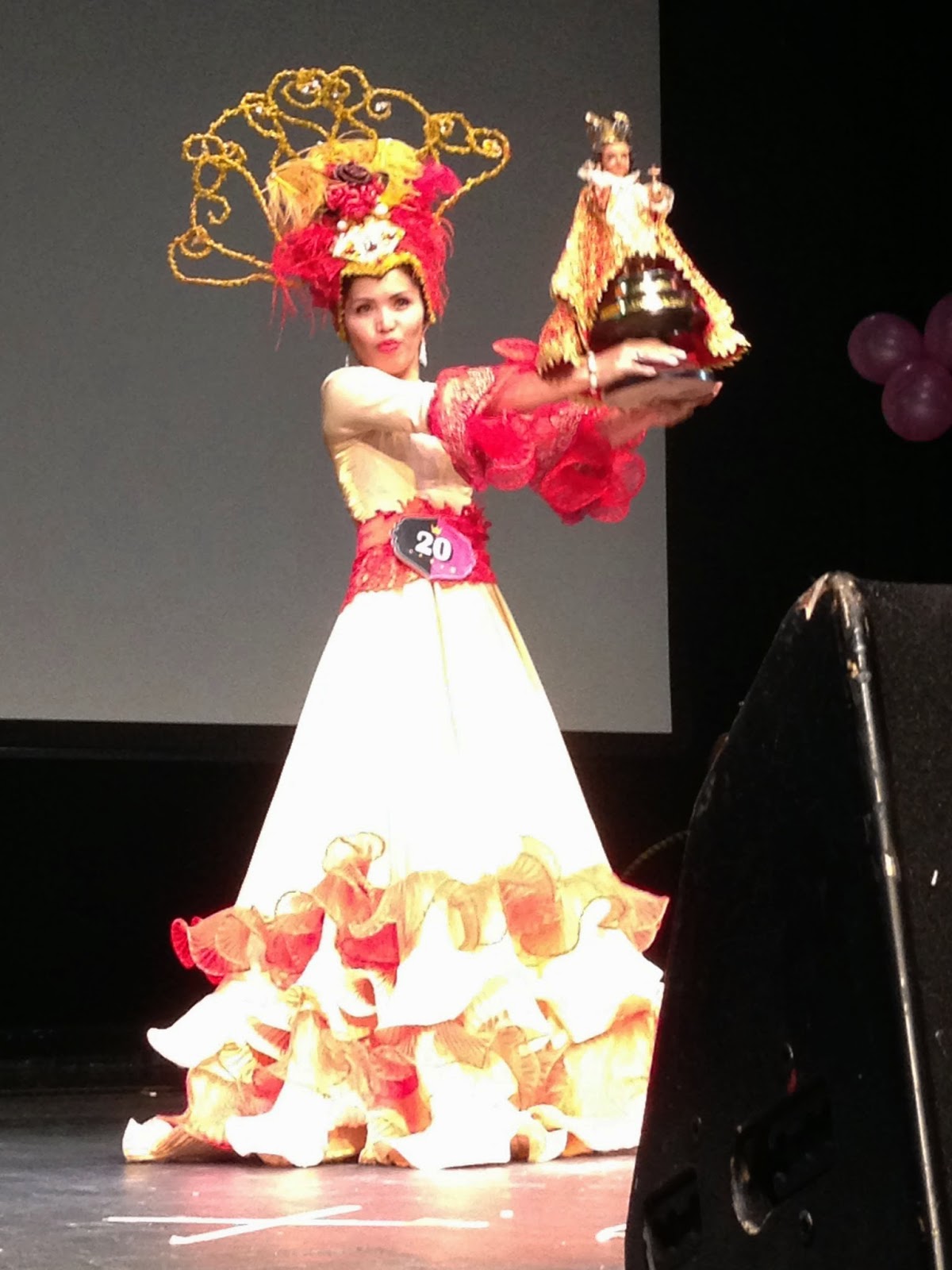 The most popular category was dancing, and wow, these ladies can shake their hips! We saw Shakira, belly dancing, hip-hop, traditional Philippines sarong dances, classical Javanese dance, pop, zumba, tribal dances, and much, much more. 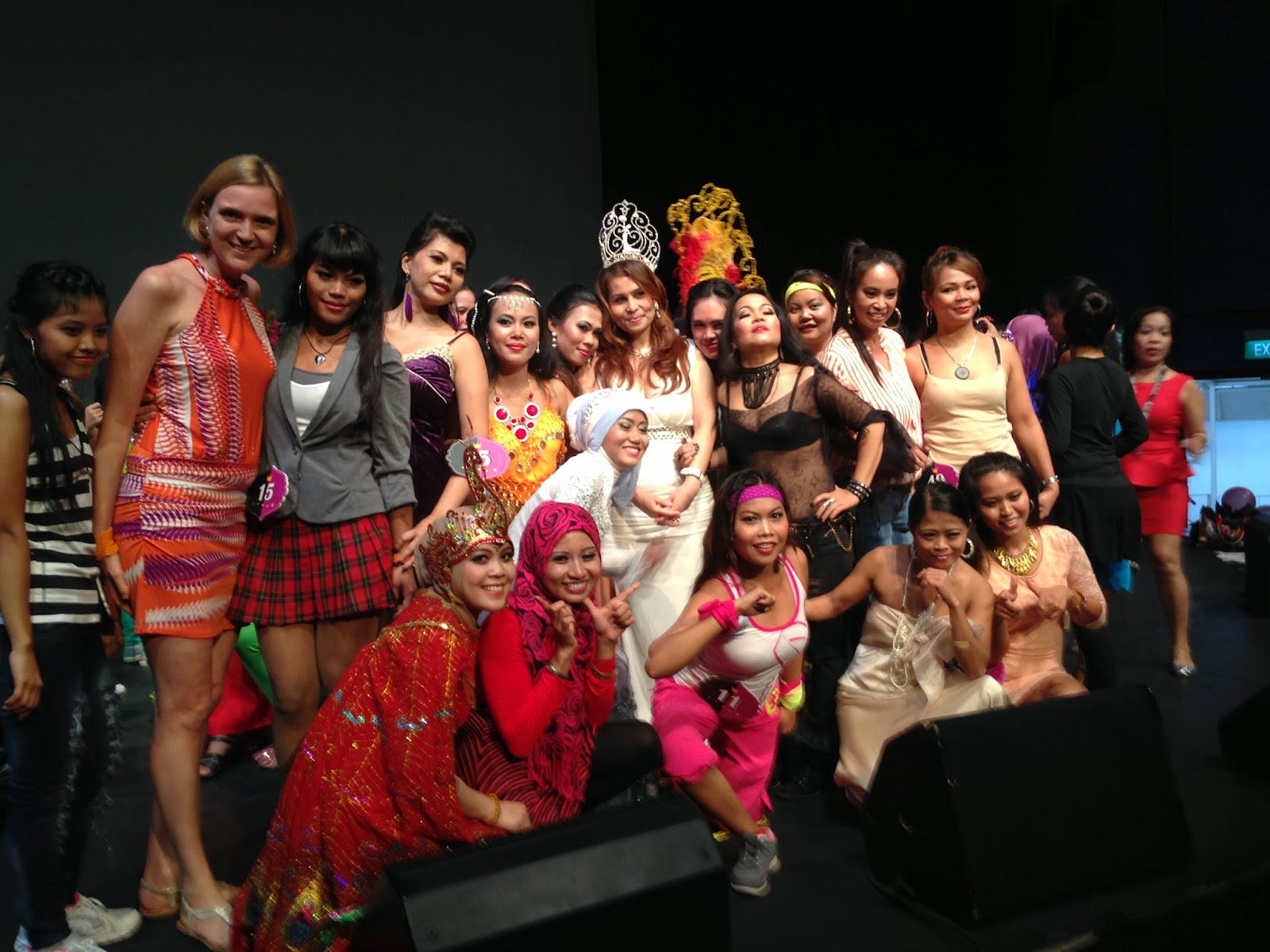 During the counting of the votes, the audience was treated to performances from fellow judges, whilst I, the writer with the singing capacities of a peanut, hid in a corner. Fifteen finalists were selected, each of them demonstrating that domestic workers are capable of more than cleaning washing, or taking care of the elderly. They are women of many talents.


I hope that the HOME Talent Pageant 2014 will teach Singaporeans how unique and special their foreign domestic workers are, and that these women deserve the right, opportunity and time off to further develop their skills and talents.

The HOME Talent Pageant 2014 final will take place on Sunday, the 29th of June 2014 from 1 to 5pm at the Catholic Junior College Performing Arts Theatre, 129 Whitley Road Singapore. Tickets are available at 20 dollars each.
Posted by Karien at 05:21 No comments:

The World Cup: through the eyes of a sports hater 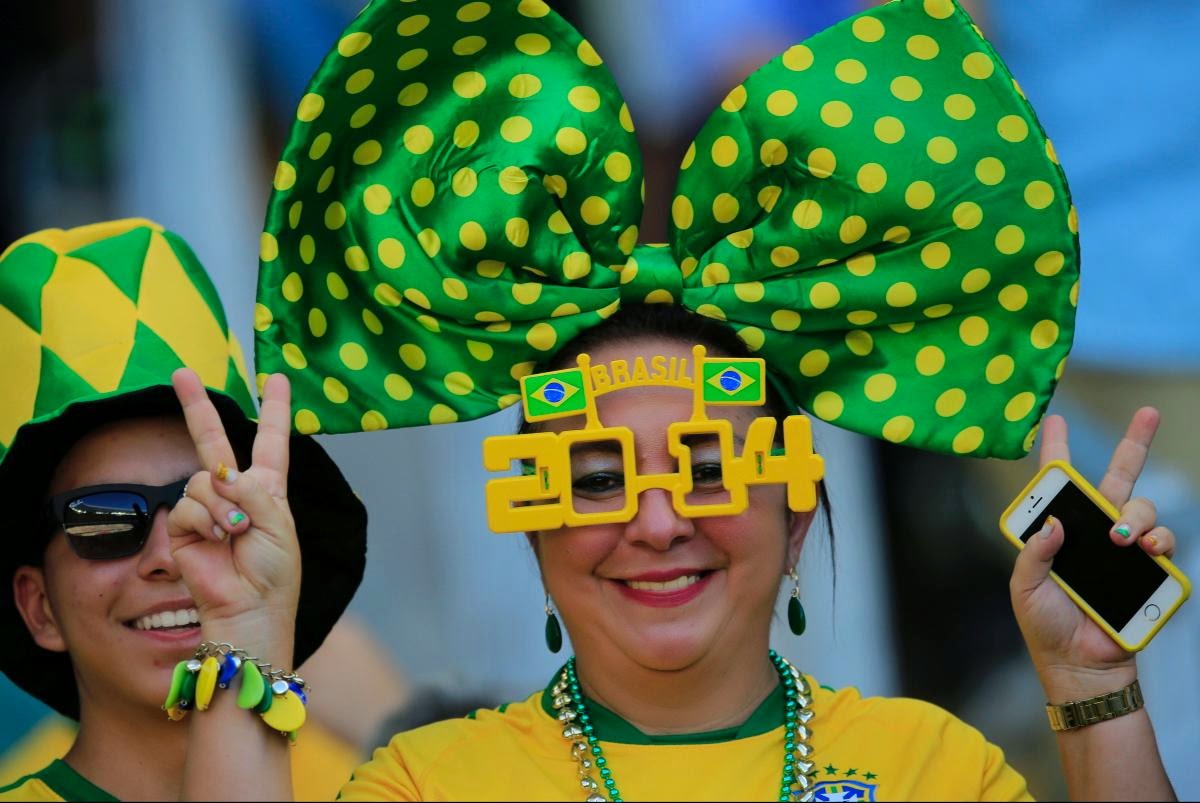 A while ago, in a taxi heading downtown, the taxi driver asked where we were from. ‘Ah,’ he exclaimed excitedly, ‘Holland! What do you think about their chances in the World Cup?’

I sat back in the cool leather, passing that one to my husband, who duly responded that he did not give them much of a chance. The taxi driver scratched his head. He was not amused. He had put a significant amount of money on the Dutch team. The odds against them had been good, and last tournament he had made some good cash supporting the orange lion.

A heated debate between the two men followed, discussing the strengths and weaknesses of the team, leaving me silent, and surprised that this Singaporean taxi driver could not only name several players of the Dutch team, but was perfectly equipped to debate their capabilities on the field as well. I, by contrast, would struggle to name a single player. I am sure Gullit retired some years ago?

Which football team to support is an important matter for a young (or slightly older) boy. My son struggles at school, being one of the few to support PSV in a group full of Ajax fans. Admirably, she stands by his daddy, even though he has never set foot in Eindhoven, PSV’s hometown, in his young live. It never ceases to amaze me that where you are from has little to do with the choice who to support. 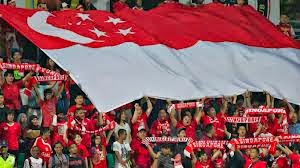 Singaporeans are great football lovers (although they call it soccer), and favourite clubs include FC Milan, Manchester United, Barcelona and Arsenal. Man U has the biggest fan base outside the UK in Singapore, and makes tons on merchandise alone. When the club decided to get listed on the stock exchange, they seriously considered the Singaporean Stock Exchange, before finally opting for the US. Not a strange consideration, if you know that Man U has a fan base of roughly 190 million people in Asia. That is about 3 times the total population of the whole UK (or 380 times that of the city of Manchester, if you are counting…)

World Cup matches are screened widely here, but since Singapore is not competing, the locals have not gone mental. Unlike others. Personally, I find watching the crazy crowds far more entertaining than the game. 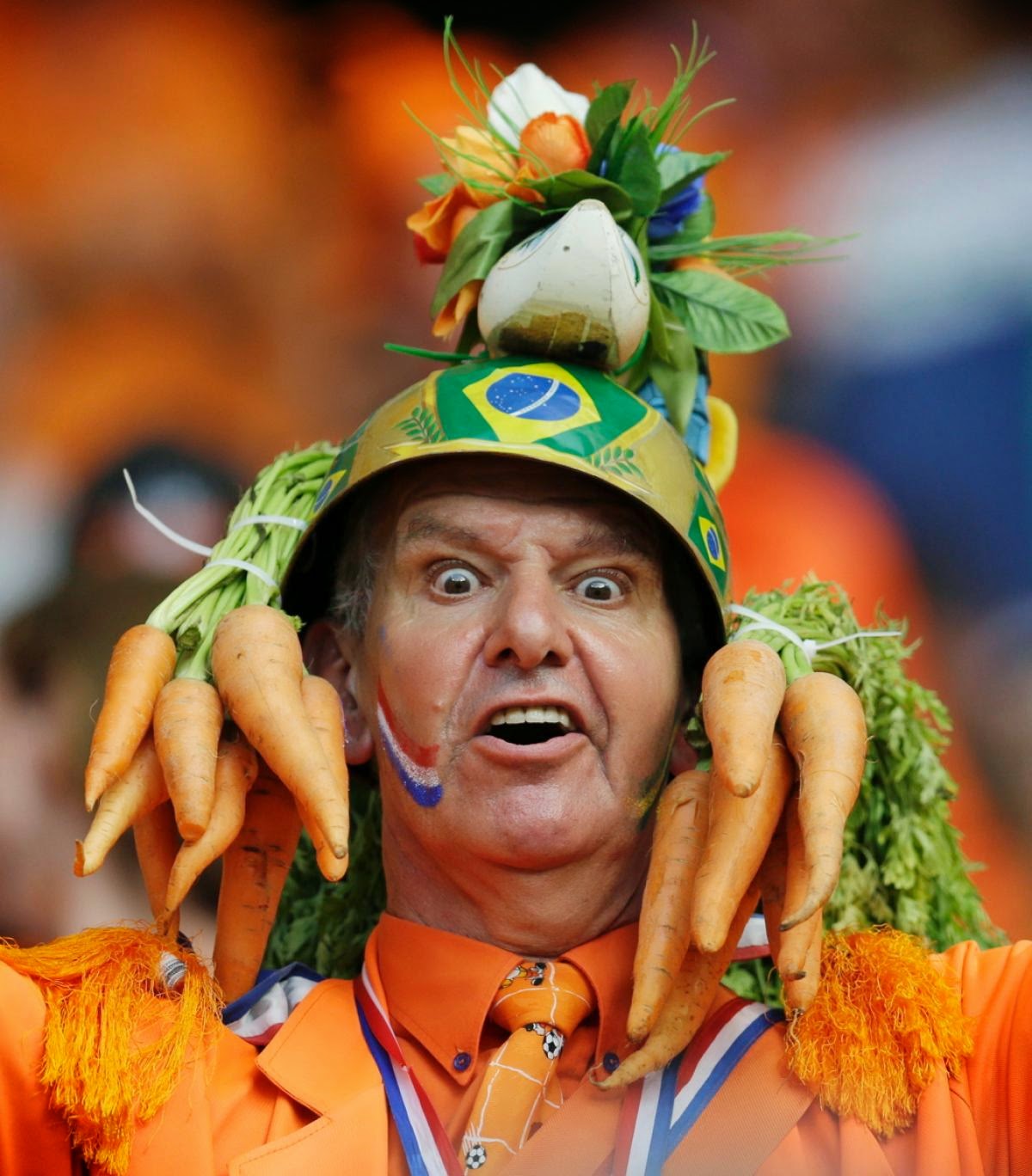 Dutch fans are some of the worst. To the annoyance of serious fans like my husband, who claims that the more people dress up, the less they really care about the game. Amongst Dutch fans try to spot ‘carrot man’, who wears a helmet with dangling bunches of carrots over his ears, the ‘badmutsman’ (or ‘bathing cap man’, I am not joking) or ‘the Indian’ between the legion of milkmaids (all male), lions, cowboys and other ludicrous loony’s. 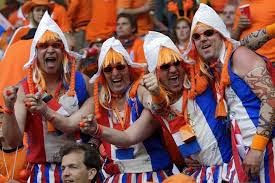 Football has long stopped being about football. And with that, for me, has become much more interesting. The circus has just begun, with Oranje kicking off with an impressive 5-1 win to reigning Wold Champion Spain and my husband googling tickets to Brazil if, just if, they will make the finals. ‘Don’t worry,’ he reassures me. ‘They won’t.’

Read the full story in Hollandse Club's The Magazine's new issue soon. In the meanwhile, check out this site for more crazy fans..
Posted by Karien at 02:25 No comments:

The business of making money

I have been very busy lately, and have not had much time to blog. Therefore, this week, I will treat you to the work of one of the students of my writing class at the shelter of HOME, the charity I work for. Jessel is a domestic worker from the Philippines, and she shares with us her story of her agent, who when she complained about having been deceived with a false contract, send Jessel a text message stating ‘I told you before my business is making money’.
‘Getting married at an early age is quite difficult. At 19, I gave birth to my eldest daughter, and the following year to my second. Life was hard with my husband having no permanent work. So I decided to apply for work abroad, in Singapore. Applying to work in another country takes time, money and patience. My first attempt failed and I had no choice but to stay with my family. I gave birth to my third and fourth child.
At that point, life got even harder. When my youngest son turned two I decided to apply again to work in Singapore. I had to pay six months of salary to the agent, but my employer let me pay small deductions every month. I was lucky, my employers were good people. I felt at home with them, even if I did not have any days off and they did not allow me a handphone. The first three months were hard. I missed my children. I cried a lot. But I got through that, as my family in Singapore was treating me well. After two years, my contract finished, and I had to find another employer. I did not go home to take a vacation because I wanted to earn money. To transfer I had to pay two months of salary to the agent again.
My second employers were good people too. They treated me as family. When my mam gave birth, I felt like I was having a baby too. After a year and a half, I made a mistake that I regret badly. I decided to go back home. My mam wanted me to stay, and I am now very sorry she agreed to send me home.
Life back home was difficult, as I did not have any income and could not provide for my four kids. I felt so down. I applied for a job in Singapore again. Processing went very fast and after only one month I was back in Singapore. I was very shocked when the agent told me seven months of my salary were going to be deducted as an agent fee. I did not get to see my contract until I had been working for the new employer for three weeks already. By that time I had little choice but to sign it. I felt that I had been fooled. Why had they not told me this when I was still in my own country? They had said that because I had worked in Singapore before, I would be a direct hire and would only get four months of salary deductions, spread out over a longer period. I had trusted them to tell the truth. Another mistake.
This time, I had left for Singapore together with a friend, through the same agency. My friend’s contract stated she would pay four months of salary deductions, and that they were going to be spread out over ten months, just like we were promised. Me, I would not have any money to send home to my family for seven months. 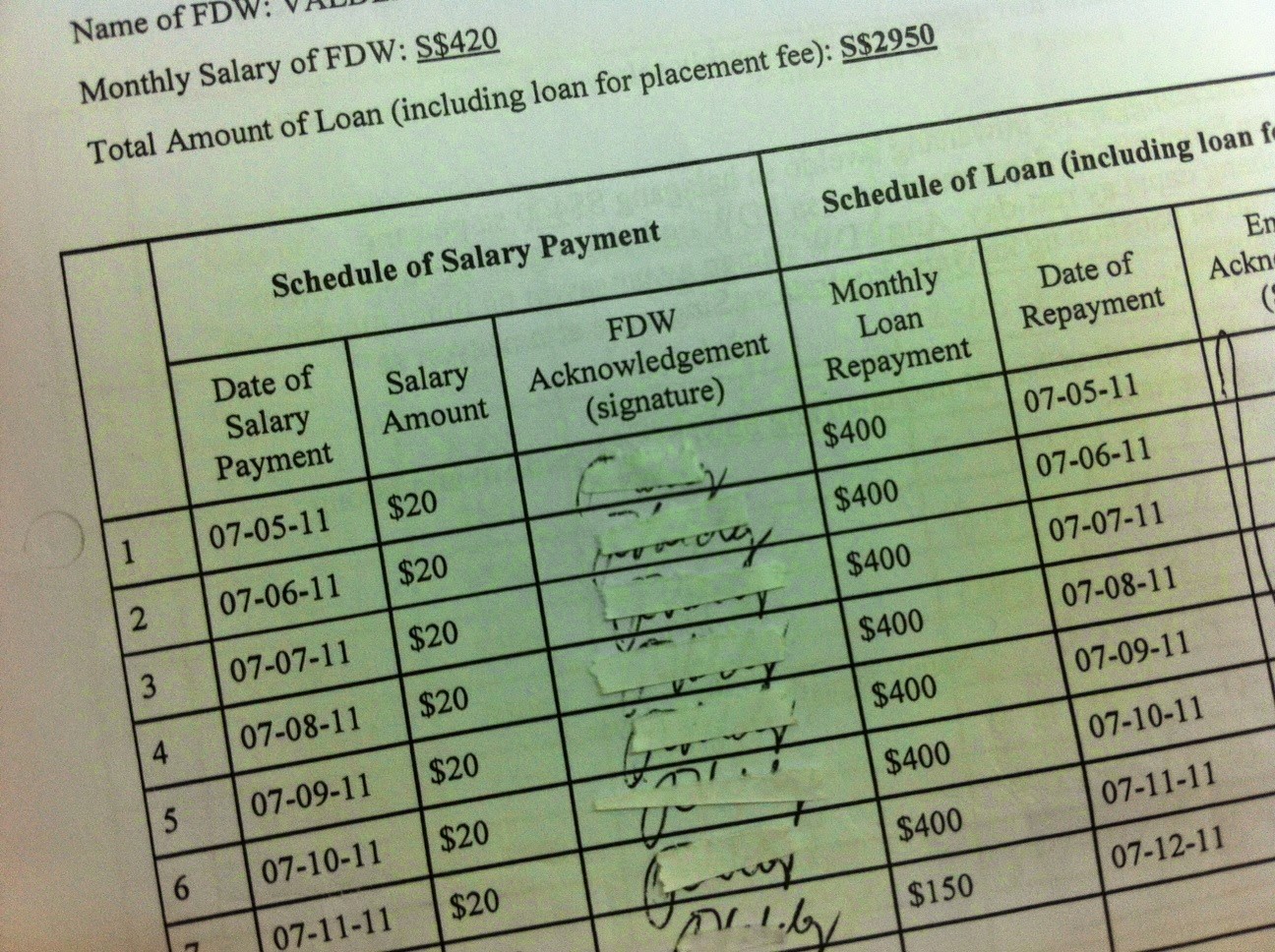 I asked my agent, who had turned out to be my mam’s sister, why my loan was so much higher than my friends. The agent said my friend was different, but when I asked why, she would not answer me. Neither did she answer me when I asked to go home. When I told the agent I was very disappointed in her, she texted me back, saying: ‘I told you before my business is making money.’
I thought I was very strong. I thought I had patience. But now, I started to feel unhappy with my work. Every time my mam raised her voice to her kids, every time I even saw her, I felt nervous. I could not fight the thoughts anymore about my own kids, now I could not send them any money. If I can’t send any money to my kids, they will starve. I was worrying so much I could not work properly. I felt depressed. I wanted to go home. That is why I ran away .’
HOME has managed to negotiate a reduction of Jessel’s agency fee, and she is hoping to find a new employer soon.

For more stories from HOME, please check out the new blog at www.home-blog.org
Posted by Karien at 19:45 1 comment: