After the first night in our new house, the cock-a-doodle-doo of a distant cockerel woke me. Sleepily, I thought, cool, the neighbours
have chicken. We should get some too.

Later, I realised the neighbours had a large dog, an impressive ridgeback, that easily chased monkeys from their modest banana plantation. He would never allow poultry on his turf. I must have dreamt the cockerel. But I heard it again and again, until I realised where it was coming from: the jungle.

A quick google-search told me we were dealing with the Red Junglefowl. Gallus gallus. For the less scientific: wild chicken. Not just runaways, but the real deal. These chickens are the ancestors of our domestic chicken. My stomach growled. Finally, free range chicken! Hormone free as well. We should catch some, so we could not only sleep longer, but enjoy a decent meal in the bargain. The eggs, I mean, off course. Reading on, I saw we could not. Red Junglefowl is on the ‘endangered list’ in Singapore. We would not want to threaten an already struggling chook.

It was not long before we got to see the fowl in all its glory. First a mother hen, with a trawling family of small, dark chicks. She was not much to look at. A dark, wild brown, white speckled on the breast. The black chicks cheeped behind our fence. They fled into the green when I approached, camera in hand, aiming to at least capture them on film. 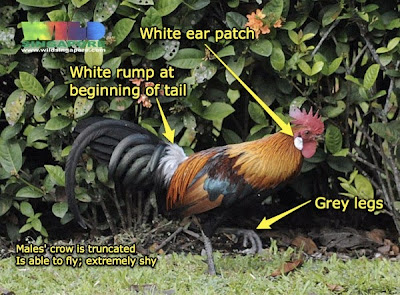 The next day daddy made his appearance, under the trampoline. A gorgeous, large cock, flaunting a tail of long black feathers, a red copper breast and a long neck, crowned with a firm red crest. Haughtily he strutted through the garden, picking around in the dirt. When I approached him he flew flapping over the hedge. Junglefowl are shy birds. They do seem to be getting their strength, and numbers, up. We already spotted some at the school, and at a friend’s house in a suburban neighbourhood. Like their progeny they seem well adapted to life around humans.

He got me inspired though. I started dreaming of owning chicken, and a daily supply of fresh, free-range eggs. The friends I asked about it shook their heads. Surely, that was not allowed in Singapore. Singaporeans like their chicken cleaned, chilled and wrapped in cling-film. Or, better even, on a plate with rice.

The government website told me keeping poultry is actually allowed, as long as you keep them in an enclosed run, so they cannot breed with their wild cousins. Out of fear for bird flu.

My hopes up, I googled on, hoping to find a forum of likeminded, full of tips and places to go to get a run build, get feed, and most importantly, live birds. No such luck. My search finally yielded someone who, four years back, supplied some live chicken. Fifty dollars each. No wonder he went out of business. Then I came across quail. Fifteen dollars each. The guy selling them had no idea where to get a run, but would be happy to show me how to care for them and feed them.

So now I dream, not of cockerels, but of quail. And I lay sleepless, thinking about how to get a run sorted, protecting them from monkeys, snakes, and toddlers.

(As I could not catch our chooks on film, photo courtesy of Singapore NParks)
Posted by Karien at 01:33