We're off to see the dragons: Komodo National Park

The evening before, I struggled to go to sleep for rain and wind battering the windows of our hotel room, and the first thing I did when I woke up was look out the window to the sea. There were layers of cotton wool clouds, some worrisome darkening in the corners by the mountains, but it was dry! 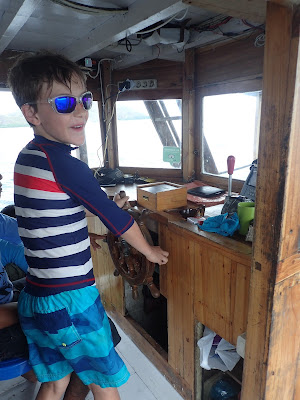 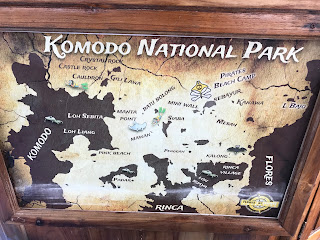 With our fingers firmly crossed, we took off to the harbour, and after only a little bit of waiting we set sail. The sea was slightly choppy, and the sky a tad overcast, not ideal for a day of snorkelling. But moping is not allowed on holidays, and we were excited to finally go and see the Komodo National Park. Much of the Park is sea, and our first day was dedicated to the wonderful world under the surface. First stop, Kanawa Island, where we snorkelled off the jetty, and just when we were putting on our fins, we saw the first wonder of the day floating just beneath us: two spiky lion fish. I literary dunked the camera under and snapped away. 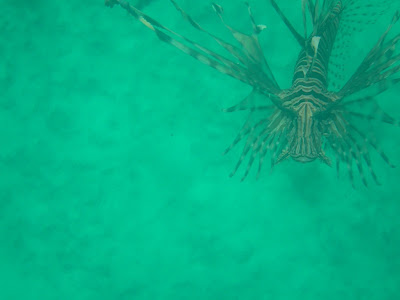 We did not see too much more, as the water was still choppy, and after lunch on the boat we proceeded for more snorkelling at Sebayur Kecil island. We saw many amazing fish, including the kid's favourite, the tomato fish, and many sea creatures. Roel and Jasmijn spotted one very rare being in the shape of a huge dark lump, somewhat like a finless dolphin. Guide Paul recons it can only have been a dugong, or sea cow, a very rare sighting indeed! It was gone too soon to snap a photo.


The sea was very choppy, and landing on our Pirate Beach Camp for the night was adventurous, but we were elated to arrive in our slice of heaven for the night. The promised camping was more like glamping, with running water and electricity (which they managed to get going just after we showered the kids in the dark). The rough beach was perfect for play, collecting huge shells, or just relaxing. 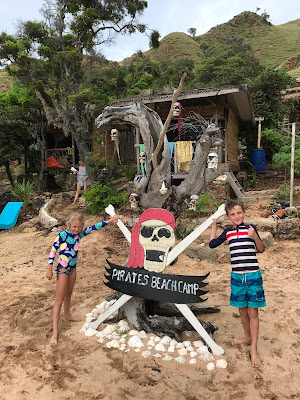 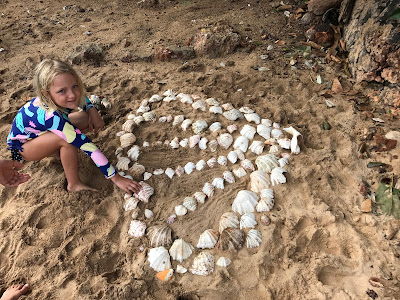 The next morning gleamed bright and blue, perfect for seeing more under the sea, first stop Batu Bolong. If you’d jump in an aquarium, you would not see this many fish, in all colours of the rainbow. We spotted a huge barracuda, as well as countless others, small and big, bright and dark. The coral was unspoilt and radiant. 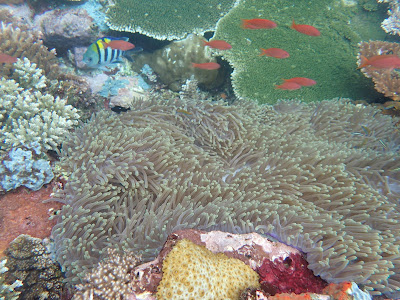 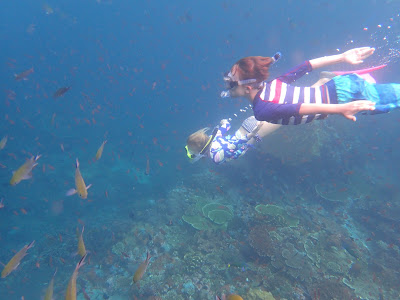 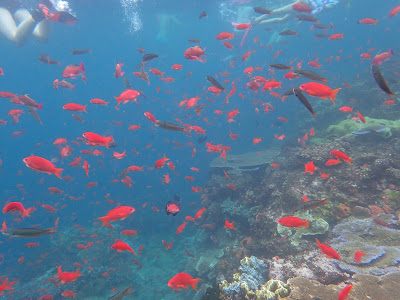 Next stop was Manta Point, and just when we were face to face with one of these gentle giants: the camera battery was flat! Nevertheless, the creatures were awe inspiring, and even though Jasmijn had been claiming she’d never swim with huge (they can reach up to 4 meters wide), scary creatures like this, she jumped in and did it.


Lunch was at Mawan Island, where we climbed the hill for the most amazing view of the surrounding islands, in the now perfect sunny weather. We saw a very pretty blue spotted stingray here, as well as many little blue fish.


Afterwards, we set sail to see the dragons!


We had only been on the island a few minutes when the fist one, a smallish juvenile, casually strutted past. We saw many of the prehistoric looking giants around the ranger station, where they liked to lounge.


Our guides kept stressing that they don't feed the lizards, that they merely come for the great smells wafting from the ranger kitchen, but they seemed a bit too well-fed for us to believe that. Then again, with three small children in tow, I rather like my dragons with a full tummy. The guides were armed with sticks, to ward off wayward dragons, and the ones that we saw move, did so at a les than alarming pace, but still. Knowing a bite of these guys is lethal, unless you want to spend a month in hospital on IV antibiotics, is enough for that tinge of terror residing in a mothers stomach make you hold your breath, apart from using it occasionally to hiss 'stay behind the ranger' to your excitedly bouncing offspring. The bite of a Komodo dragon is not poisonous, but contains a nasty cocktail of bacteria that will slowly kill even a karbau, the large local buffalo. The patient dragon will follow a bitten buffalo around for days until eventually drops dead, and can be guzzled down. 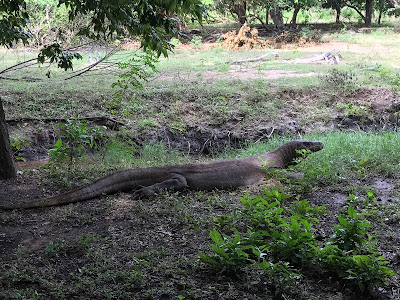 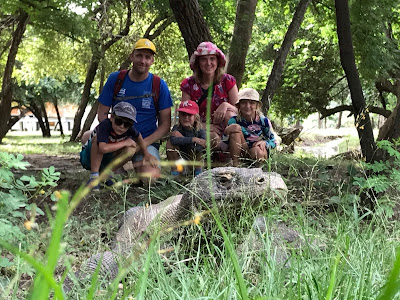 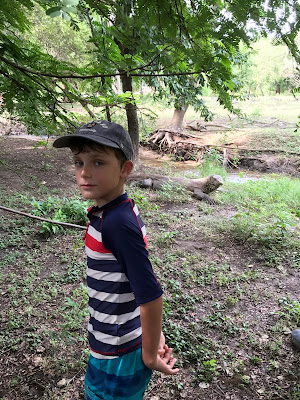 After admiring the lazy lizards at the ranger station we went for a walk around the island, which had amazing views, but not a dragon in sight.
When we were back on the boat it was time for the last stop of the day, sunset at Kalong Island, where (they say) a million flying foxes live. At sunset they wake up collectively, and start their nightly trek to Flores mainland to hunt their dinner. An amazing sight to behold!


Then it was time for us too to head back to Flores, in the dark that quickly descended. Our adventure was almost over, and it was one we wil never forget! 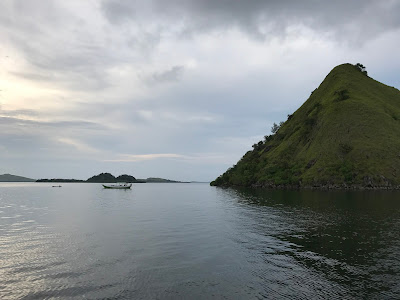