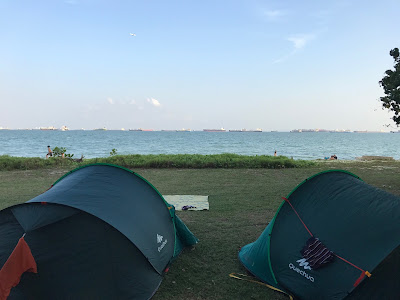 After our three-week trek through Portugal, France and the Netherlands, where we saw family, as well as old and newer friends, we still had almost a month of summer holidays left. A week of doing very little was restful enough for me to give in to the kids' repeated pleading: we would go camping.

We went off to buy two cheapish tents, and tested them in the garden. But that was not real enough. The most adventurous places to camp in Singapore are on offshore islands, but to practice; Singapore’s mainland parks have campsites too. I decided on Pasir Ris. It has plenty of cycling paths, a wetland reserve, a huge playground, and we had never been there yet. I figured few people would be crazy enough to go camping in the height of summer, and that we could just get a (free) permit on site. But when Roel, who did not trust me, decided to register online, it was already full. We would have to go to East Coast Park. Also nice. 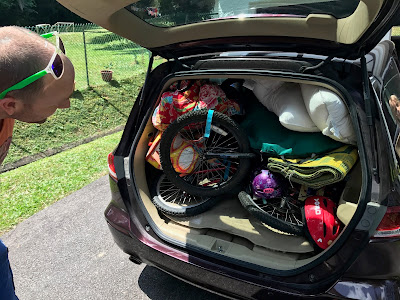 After we had packed our sizable seven-seater to the brim (we were going one night), our escapade started, as many do, with fights and shouts and accusations that shook the foundation our marriage wobbly. The first challenge was locating an AXS machine to print the camping permits Roel had registered for. No, there is none in East Coast Park these days, regardless of what maps say, and yes, there is in fact one about 100 yards from our house, which we noticed on the way home. Of course all of this was my fault.

Then there was the thing with the air mattresses. It turned out I had packed one single and one double – for five people. The upside of the mistake was that it saved Roel some breath, because when I unpacked the pump, I realised I had forgotten to pack the connector valve thingy. It also saved us a trip to a nearby sail club to scrounge electricity (I had not managed to locate the foot pump in our piled high storeroom). What we did find, rolled in the air mattress was the cap of another – the double one that sleeps 3 kids – that had gone missing when friends had borrowed it a few months ago. The matching air mattress, sadly, was not here. 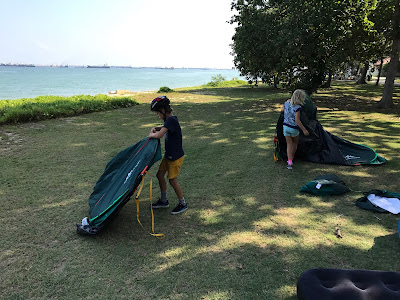 Blowing up by mouth the offensive objects, left Roel so out of breath that he had none left to argue when I said that, during my futile quest around fellow campers to borrow a pump, I had spotted a better spot for the tents. Directly at the beach, closer to the toilets, and not right in front of – later on potentially smelly – BBQ pits. He gave in grudgingly, and I dis- and reassembled our tents, in not too much more time than the 3 seconds promised on the package, at the new spot. 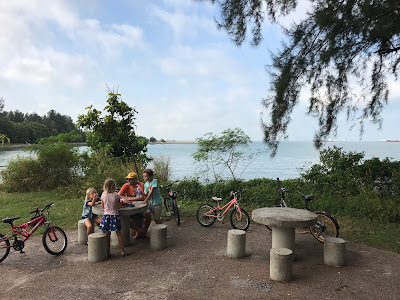 We cycled, drank sugar cane and lime juice, picnicked, swam in the murky sea and told stories around an imaginary campfire. We ate our pre-cooked quiche and salad with gusto, but still looked jealously at our neighbours grilling crabs and satay on charcoal. We slept uncomfortably, hot and sweaty, huddled with the two of us on a single air mattress under the roaring planes taking off at Changi Airport. But the next morning, breakfasting with chocolate croissants and crackers with Nutella in the morning breeze, we looked at each other and smiled. Three happy campers rode around on their bikes. Yes, we promised them, we’ll go again. We now know where the AXS machine is... 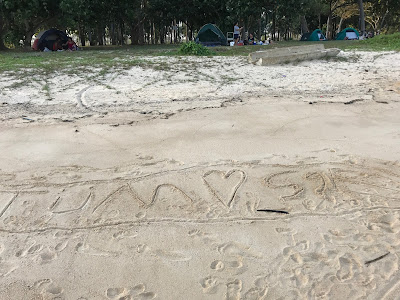