In search of adventure this spring holiday, what place better to fly to but Flores, Indonesia; the islands of fire mountains and dragons?

We started with a quiet day of acclimatising, and exploring the environs of Labuan Bajo, in western Flores.  We did as the locals do, and rented motorcycles. Many a family was squeezed on one bike, mama and dad, a baby wedged between, and additional children in front and back, but we opted for two scooters instead. Touring with the wind in your hair and the sun in your back, between gorgeous hills and turquoise bays, rice fields and villages, is such a more intimate experience than looking out from the window of a car, and much more exciting and enjoyable. We visited remote beaches, muddy caves, crossed rivers and many, many bumps and holes in the road. Scootering might look easy, but I have the scrapes and scratches to prove that finding your balance is not that easy. Without children's helmets, it can be a tad unnerving, and honesty forces me to admit that the reason I toppled over was because I went too slow...

The next morning we sat on our ship in the harbour waiting for the crew to sort out the promised yet absent children’s life jackets, so we could start the next chapter of our adventure; a three day tour of the Komodo National Park. The air got darker and darker, and when the sky broke, the rain did not take long to soak us to our underwear in our smallish boat, regardless of its roof and plastic blinds. The wind pushed the tranquil sea into ominous waves, and as the storm swell, the captain spoke the redeeming words: we could not sail today.

An hour later, still moist, we sat in a bleak hotel lobby hotel playing cards, when we received the message that the forecast was bad: tomorrow there would not be a tour either. Tijm rejoiced in the idea of two days of games, I less so, so when Roel suggested we head out to the mountains today instead of later in the week, I jumped at it. After arguing with the hotel about payment (or not) of the room that we had occupied for just an hour, we checked out again, and took off to downtown Labuan Bajo to find ourselves a car. A friendly driver took us up in the mountains of West Manggarai, the crater lake of Sano Nggoang being our evening's destination. We had figured this would be about 2 hours away, but we had not taken into account the status of the road, and the wet weather – quite obviously it was raining in the mountains too. To say they were potholes in the road would be a broad understatement, in many places heavy rains had pummelled away large chunks of the road, and we had to cross many a waterslide, mud pool or pile of rocks. Thankfully, our trusty driver navigated them calmly and securely, safely yet slowly. After a few hours, we realised that at this pace, it would take us at least three to four hours to make it to the crater. But the scenery was amazing, the cloudy forest full of lush ferns and trees, and the views that occasionally shone through the mist was so gorgeous that time crawled by as fast as our car. The experience beat the hotel lobby by far.

By the time we reached the lake, it was late afternoon and even though we had read there were some homestays here, we had no clue whether they would have room for us. Mobile network ceases to exist in central Flores quickly outside of the touristy town of Labuan Bajo, and there are no landlines either, so there had been no way to call ahead. We had figured, no tourists, apart from us, would be crazy enough to trek to in the mountains in weather like this. When we had asked our friendly driver if he could help sort out accommodation, his English being worse than my Bahasa Indonesia (which covers menus and food fine, but not too much else), his smiling nods about a 'villa' by the lake were not much of a comfort.

When we got to the lake, it shimmered gorgeously in the foggy twilight, and we drove around it to reach Nunang, the village on the other side. The driver looked worryingly at a rocky road down to the lake, uttering the single word 'wow.' As he had been unfazed by the hugest potholes so far, this was slightly worrying. But after some encouragement by friendly villagers, he turned the car down, with only a tiny frown, and drove all the way down to a large, newly constructed two-story house at the end of the road, on the shore of the lake. There safely arrived, he pointed and smiled: 'villa.'


Most of the houses in the villages we had passed were made of bamboo matting, or concrete bricks at best, so the term seemed justified. A man opened the gate for us, and beckoned us in with a wide smile. His name was Petrus, as he introduced himself with a firm handshake. In good English, he explained he had built this villa together with his brother in law, to receive guests by the lake. Then, he looked apologetically. The house was fully booked, with guests arriving from Jakarta that evening, to stay for a week, on business. It seemed this was a most rare occurrence, and ultimate bad luck I our timing. His English was not sufficient to relate what their business was in this remote area, but after some questioning, he did manage to explain that they had made the reservation by sending a message to his friend in town, who had delivered it on his motorcycle. As we were hours from any town with hotels, over a badly potholed road, and it was fast getting dark, I was now getting slightly nervous. The kids were tired and hungry, and our stores consisted of water and peanuts. But I need not worry, Petrus said, we could stay at his house.


It turned out Petrus had two nice bedrooms with double beds in his own house, for guests; one for us, one for the kids. Stuffy from a long day in the car, we decided to take advantage of the dry spell, and headed to the Crater Lake for a dip. The lake is over 500 meter deep, and fresh, with a slight sulphuric tinge - no fish can live here. When we hit the water, the sky cleared, and the last rays of the setting sun cautiously bathed the mountains surrounding the lake.

After we'd dried and dressed, Sisilia, Petrus' wife, turned one of the hens roaming the garden into tasty fried chicken served with rice and vegetables. Dinner was served with stories from Petrus, who liked every opportunity to further improve his English. The beds were comfortable, and a generator provided light at night. The guests from Jakarta turned out to be here to install a more sustainable source of energy than Petrus’ noisy generator: the village was to be a test site for a geothermal energy station. The next morning a meeting would be held with the town to decide on the best location.

After a good night sleep, broken only by roosters and rain battering the metal roof, and a breakfast of nasi goreng and homemade sambal, we decided to warm up in the village hot springs by the lake. Bamboo poles guided the hot water in little showers, and when the cold rain started again, we had to fight, as there were four of them, and five of us. 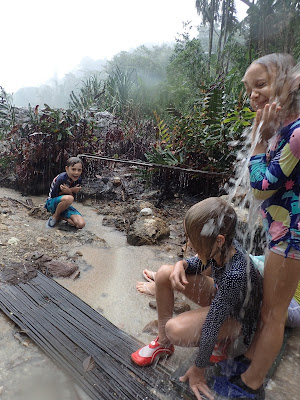 We had hoped to further explore the area after breakfast, but the on-going downpour left us little choice but to move on. Luckily, by the time we had reached Wenang village, the rain had stopped, and a watery sun peaked through the clouds. Friendly Fiona from the village agreed to guide us through fields of rice, coffee, vegetables, cacao and candle nut trees to see Cunca Rami, a waterfall where we could swim, according to the guide books, in lovely shallow pools below the cascade. 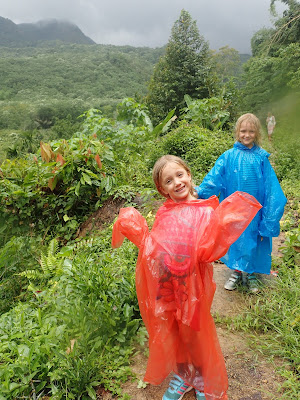 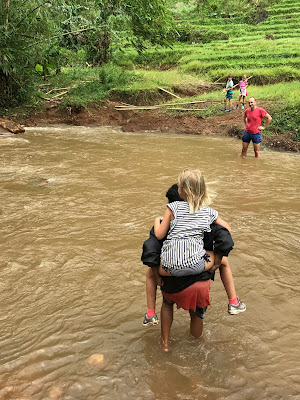 Fiona stopped in her tracks when we reached the river. Normally, it was ankle deep, but now it was frothy deep, and she shrugged we should turn back. Unfazed, and wanting to make most of the dry weather, we decided to cross, the girls on Roel and Fiona’s backs. 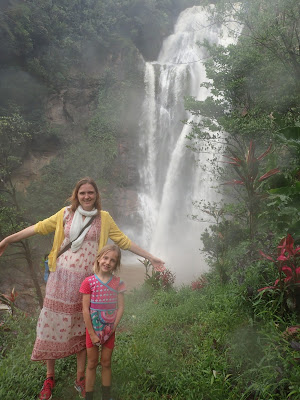 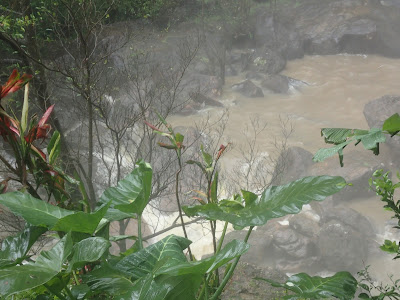 When we got near the waterfall, it was just like a storm had started again, the spray of the falling water blowing far and wide, making us wet again. Even Fiona was impressed by the bulk of the waterfall, doubled by the rains, but swimming was out of the question because its roaring size made foaming whirlpools in the shallow pools. Back in the village, Fiona treated us to local coffee, while she taught kids a game with unshelled candlenuts.

When we arrived back in the mobile network sphere of Labuan Bajo, we were happy to learn that the weather had cleared enough to resume our next highlight: the Komodo Adventure Boast trip.
Posted by Karien at 06:16