The hassle with the hens

I figured you must be surely all wanting a chicken update, right? Because you are all freaks like me, that are obsessed by feathery chooks and eggs?

The thing is, why I have been so consumed by chickens lately, that we have had some very nasty events. First, we had another visit of a not-so-friendly python. It turned out the new handyman had not done a very good job of fixing the hen house, and there was a hole, conveniently out of sight behind the nest boxes. The image of what I saw that morning when I approached the run is etched on my retina forever, I’ll spare you gory details, but our faithful top layer and top hen Tilly was dead, as well as a young pullet that we had not even had long enough to name it.

After Acres collected the snake, and my heartbeat had slowly gotten back to close to normal, I consoled myself that in fact eight hens would have, in fact, been a bit too much of a good thing. In the run we now still had our ‘new’ old hens Messy and Lizzie, that popped out eggs daily like clockwork, as well as another unnamed pullet that would become Lucy. And, of course, we had the three chicks. Six hens was plenty.


Little did I know, our troubles had only just begun. A few days later, Messy got yellow diarrhoea, curled up in a corner and died. When Lizzie started to dawdle too, I quickly administered antibiotics (in over a year of keeping hens in a jungle I have drastically changed my views on organic farming practices and anti-biotic free), but she still died in less than a day.


Now, poor, shy Lucy was all alone. Well, apart from the chicks, Daisy, Fientje and Ronaldo, who had spend their time wisely eating, poo-ing, cheeping, and above all growing, in a cage inside. They were more than ready to go in the run. But mother hen me was afraid. What mysterious bacteria killed Messy and Lizzie? Did the python bring it? Or did the stress of it's visit merely smash their already weak battery farm immune systems and they succumbed to standard jungle bacteria? Did the monkeys that like to lounge on the run drop nasties? Why did the anti-biotic not work? Was it a virus? Coccidiosis? And what about Lucy, who seemed fine, apart from a low appetite and the presence of ‘motile bacteria’ in her poo.


I spent (a lot of) time on online forums, chicken websites, and emailing with random vets. The results remain inconclusive.

So now what? I scrubbed out the henhouse with bleach, twice. I spread pine oil solution in the rest of the run. I have let the chicks in the run for short periods of time. I have decided it is out of my hands.

This weekend the chicks will go the run permanently, where they can chase and harass poor Lucy, who is much bigger, but too sweet and shy to fight off three little rascals, and prefers to escape on top of the chick’s cage.

I worry. I despair. And I keep my fingers crossed.


Update: the chicks have been in the run for five days now, and love it. They don't bully Lucy as much as at first, and have learned to sleep on the perch. Fingers are still crossed, but so far so good. 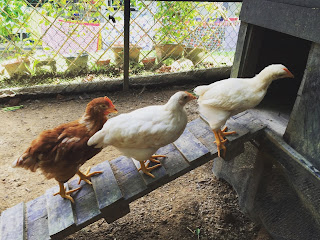