In front of the beach resort is a wooden shelter. Plastic sheets shield the sides from wind, sun, rain and peeping Toms. I’m lying on my back, and bent over my feet is Mr Foo. When he greeted me this morning, I knew straight away: this would not be an ordinary massage. 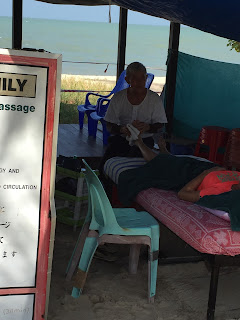 Mr Foo shushes me when I want to talk, and starts on my feet. He rubs every toe separately and tells me what ails me. Tiredness, sure. Back pain, shoulders, neck, off course. And headaches, who doesn’t have them? He tells me that he used to treat everything in his village, down in rural Penang, from cancer to diabetes, and that bone setting was his specialty. I can guess why he moved on to massaging tourists; he never charged the villagers.

I nod, and refrain from comments about Mr Foo’s cancer curing abilities, but ask about his village instead. The reflexology is relaxing, and soon Mr Foo moves upwards, rubbing my legs with fragrant clove oil. Normally, my massages are facedown, and silent. Masseurs in Singapore barely speak English. Between rubbing and commenting on the state of my body, Mr Foo shares his live story.

His father took a boat from China to Singapore in the middle of last century. The boat trip was free, but to pay back the cost he had to work on the Singapore docks for three years, as a coolie. The docks were a dangerous place, coolies were accident prone, and soon Mr Foo senior started to develop his talents as a traditional healer. That suited him more than lugging merchandise, and when his three years were up he moved to Penang, which, like Singapore, has a large community of Straits Chinese. He met a girl in a village, started a fruit plantation, setting bones and curing the villagers on the side.

Mr Foo has now started on my arms, prodding sore muscles and explaining where I need to knead myself daily to loosen my stiff shoulder. We talk about his village, which has fishermen and fruit plantations. He himself opted out of the fruit, leaving his family plantation to his brother. His other inheritance was more valuable to him: the wisdom of traditional Chinese medicine his father taught. Where Mr Foo senior used to order all his herbs in China, junior does not trust the Chinese. He goes into the jungle, to collect his own. His own son, Tommy, who has joined him in this ‘Father and Son’ reflexology business, refuses to join him on foraging trips into the snake-infested jungle. Now and then, Mr Foo and Tommy talk in rapid Cantonese over my head, looking and pointing at the hotel and its guests. 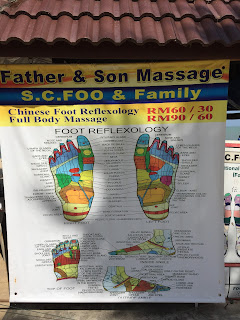 We chat on, and Mr Foo tells me his children were smart, but did not manage to get into a local university. Malaysian universities only accept a small number of non-Malays, even though the proportion of ethnic Chinese and Indian in the country is more than significant. Wealthy Chinese send their children to Singapore or overseas, but Mr Foo could not afford this.

We move to my head, and neck, and I stay quiet for a bit. ‘Your head is blocked,’ says Mr Foo, ‘especially on the left.’
I nod, as he attempts to loosen my neck, shoulders and arms.

We discuss the shiny condos that spring up to the sky all around the island, on-going construction, and soaring real estate prices in Penang. The massage business must be going well, Mr Foo has two apartments in Georgetown he rents out to pay for his village bungalow.

Then, all too sudden, my hour is over. The next client, an elderly German lady that winters in Penang, is waiting. Mr Foo is booked up days ahead.

I walk back to the pool with the noisy kids, covered in a lingering smell of cloves, loose limbed, and the feeling I got to know not only my own body, all the hotel gossip, but also Penang a bit better.
Posted by Karien at 18:58