Into the jungle – Uma ‘light’

In front of me Amanipai takes slow, decided and steady steps. Occasionally he looks behind him to see if we are on his track. The path, if you can call it that, in this jungle is rough as we stumble along it. We often walk though rivers, the undergrowth elsewhere dense. The water isn’t deep, ankle height mostly. There has been an ongoing drought in Siberut Island – in all of Indonesia in fact – it hasn’t rained for six months. The plan was for us to make the first part of our trip upriver in a canoe, but we now had to do it on the back of motorbikes. It was a lumpy ride, that took us past a number of vegetable gardens and government villages over a path that became less of a path and more of a jungle as we rode away from the town. We were finally on the way! 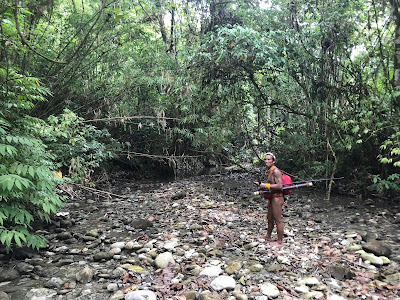 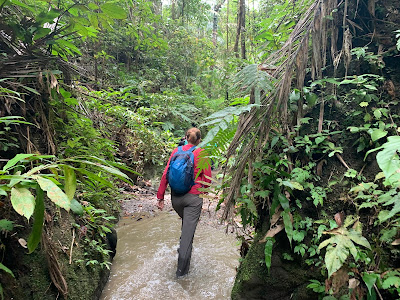 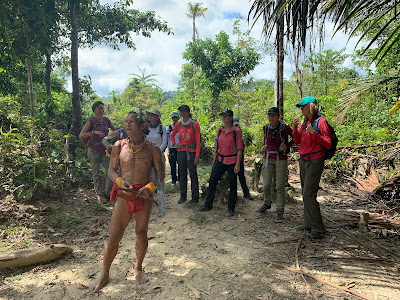 The last few hours we trek on foot. Trees aren’t high around here, this area consists of swamp forests. I was expecting to trek trough deep mud, and as a mud lover, I have to admit I am disappointed – the lack of rain has dried the soil to hard clay covered in fine dust, which veils the green lushness you usually experience in tropical woods like these.

We sleep at Amanipai’s Uma in Buttui for our first nights. Here we get our introduction to life in an Uma – gently. We travelled with porters carrying bottled water, chefs to cook for us and - piece de resistance - especially for us, eleven female visitors, Amanipai has put in a brand new concrete step toilet! The house is quite new and clean; the river for bathing and collection of water just below. 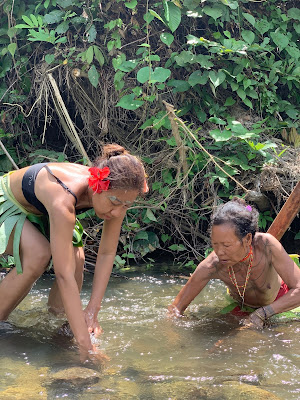 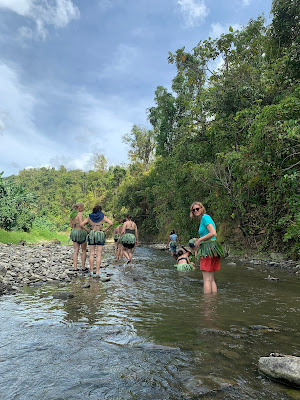 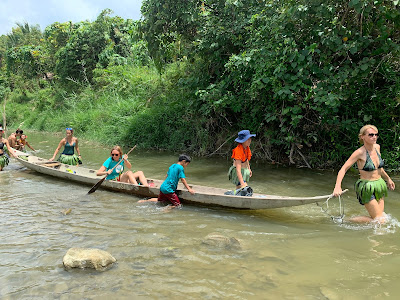 On the second day, as we are relaxing after a fishing expedition and lunch, we see several visitors come and go via into the narrow paths to the banana plantation across the river. Curious, a few of us follow for a stroll, and after passing sago and taro, are astonished to realise the village of Madobag is just behind! And here we were, thinking we were in the middle of the forest…We even manage to find a tiny warung, run by pak Dani from Padang. His wife is the local primary school teacher. I’m glad of my improving Bahasa Indonesia as we chat with Danni and the other customers – in traditional loincloth and tattoos, who we treat to coffee and the ubiquitous cigarettes. Poppo has his name conveniently tattooed on his arm. This part of the village has a school, volleyball field, and many small wooden houses built by the government to rehome the tribes from the forest. Some seem empty, others have well maintained gardens. Danni tells us many villagers also have a place in the jungle, sending children to school is an important reason for families to stay here. He is glad of our business; cash is a rare commodity here. The village has a still, eerie feel to it, but I’m not sure this is in part because at this – hottest- time of the day people hide somewhere cooler.


On our way back to the village we learn tall blonde women are very much a spectacle in these parts, a familiar sense in South East Asia. A few marriage proposals later we make our way back to the Uma, where Amanipai is going to demonstrate the traditional way of making poison for the hunt. To be honest, I barely listen to Amanipai’s demonstration, nor Johan’s translation. In my mind, I am trying to piece together the Uma, the village, and it’s people. Amanipai’s skills seem genuine, but how much are they used in reality? How much is his Uma influenced by the village nearby? And how different will it be in Attabai, where we leave for tomorrow – to stay for a week in another Uma which is much more remote?


I am shaken out of my reverie when Amanipai holds a stick in front of my face and points at my mouth with a wide grin. Without thinking, I stick out my tongue, and only when the bitter spicy – the potion contains tiny wild chilli’s as well as many other roots and barks - hits my taste buds, I realise this is a mixture I have just been told will kill a wild boar in minutes. Amanipai laughs, and Johan reassures me: it only kills when applied intravenously, not when you eat it. 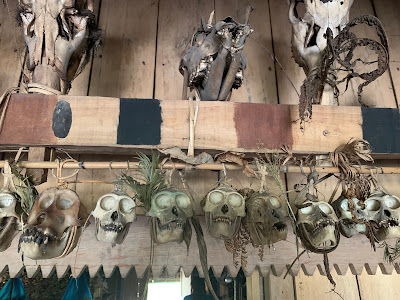 That night I go to sleep – still alive – thinking excitedly about what the next days will bring. As the smoke coming from the kitchen swirls between the monkey skulls above my head, I listen to sounds of chatter that seep in from the common veranda. I smile, remembering how I had imagined these people living in nature, without electric, would go to roost when the chickens do. On the contrary: everyone including young children were up most of last night. Amanipai is a newly initiated shaman, still learning, and he met with three other kerei and spent most of the night in ceremonial chanting, and exchanging information. All the traditional knowledge of the Mentwai kerei is shared orally, so every time two or more shamans meet, there are rituals and ceremonies to perform, and lots of information to share.

The rituals involve the killing of four roosters, which I am glad to notice is done by breaking the necks, no bleeding, since this is done by one of the sons at mere inches from my sleeping pad. After hours of chanting and chatting, we decide to call it a night, and try to sleep best we can, next to the kerei immersed in their discussions, soothed to a little sleep by the rhythmic sounds of their singing. It is not easy to figure the exact meaning is of the rituals we witness; Amanipai’s Indonesian is similar to mine – basic. Guide and translator Johan is helpful, but I still don’t feel I’m getting the depth of things.

The Uma is full of intriguing objects, like the wooden birds flying from the roof of the veranda. Toys for the spirits, Johan explained, for the souls of things to play with. From research I know that the Mentawai believe everything has a soul. Some of the ceremonies we witness are to give thanks, or ask permission to things they take from the forest. But of course ten days isn’t nearly enough for any kind of real understanding, as always much of my wisdom will have to come from books. Some of the rituals remind me of the blessings common in Bali, with its Tri Hita Karana, or three principles of harmony. What we do see, what we are told – it definitely tastes like more.


As I enjoy the relative silence and a good night sleep, excitement further builds. Tomorrow, we will leave the comfort of Amanipai’s Uma and trek to a more remote area, to stay for a week in a place with no village, shops or a toilet!
Posted by Karien at 01:02