That thing with Bali dogs 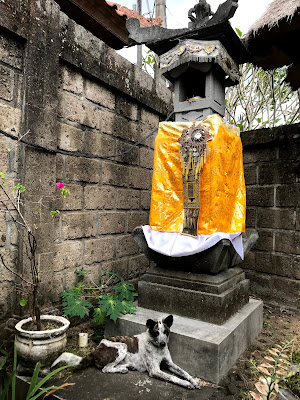 When people talk about the ways of Bali – which are supposedly both mystical and mysterious, I’m always sceptical. A very down-to-earth Dutch person doesn’t believe in such things, obviously. But Bali didn’t need long to prove me wrong.

Roel and I have had a long-standing argument about pets, which basically boiled down to the fact that he wanted a dog and I didn’t. But now he was gallant enough to accompany me to the island of my dreams. So when someone posted a cute doggy on my Facebook wall, that happened to be staying in a kennel on the East Coast, conveniently located mere miles from where we were spending our holiday – it made sense even to me. Lara, a cute little Bali rescue dog joined our family. She was about one year old, raised and leash-trained by a Dutch dog rescuer. Lara has a sweet temperament that started to make me rethink my stand on dogs.

One had better like dogs when visiting Bali. Because the main thing with Bali dogs is: they are everywhere. And when I say everywhere, I mean everywhere. It is hard to walk more than a few meters without stumbling over one of the mongrels that live on Bali’s streets. Although they look like street dogs, the majority actually has an owner. Unfortunately, some of these owners have a different mentality towards pets from what most of us westerners are used to. Lucky for the dogs, an army of dog lovers are ready to sweep to the rescue of the mangy, the underfed, the scabies sufferers. They feed, medicate, sterilise and educate, important work that will hopefully help establish a healthy, happy population one day.


They also swamp my social media daily with pictures of cute puppies in search of a ‘forever home.’ But I was resolute – I’m done with sleepless nights, potty training and needy infants. No matter how hard the girls begged, we would not get a puppy.

But then, one unlucky day, Bali strikes again. As we drive off from the Pantai Munggu carpark, where we tried to coerce Lara to like walks on the beach, we feel a bump. Roel looks up from the wheel and a queasy feeling comes up in my stomach. We pull over and we rush out of the car. Long story short – we hit a dog.

Not only had we hit a dog, it turns out we had hit it right in front of one of Bali’s dog rescuers – which are only slightly less ubiquitous than dogs here. She had just had this little stray vaccinated. Of course we immediately offered to pay for any veterinary costs.

It turned out the dog had broken both hips and needed surgery - expensive surgery. Since we live in a country where some people cannot even afford medical care for their children, we found ourselves in a moral dilemma. Was it justified to spend this amount on a stray dog? On the other hand, not only had we promised to pay, we felt responsible for the poor creature - after all we did drive over it. I think you can now all see that there is only one way this story can end? 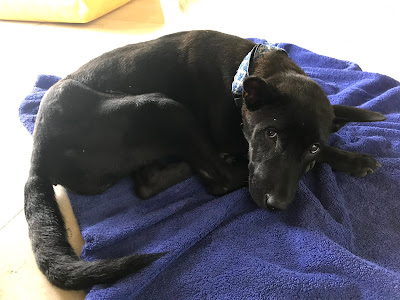 There is no way we could put a dog back on the streets after spending so much on medical bills. Little Munggu, estimated to be about six months old, is a cute black puppy with the saddest eyes ever. Having adopted me as her new mother, she follows me around everywhere like the puppy she is with her slow limp. In the end, it didn’t matter whether I wanted dogs or not. The dogs got me. 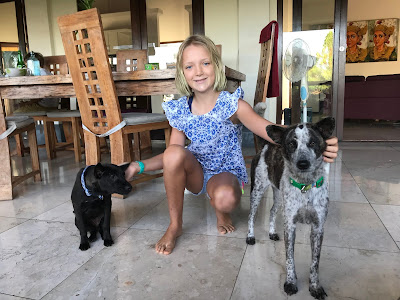