Adventures with the apes

‘Watch out,’ the guide in front of me yells over his shoulder when he suddenly stops in his track. ‘It is Jackie. Jackie loves to hug. But don’t worry, she is not dangerous like Mina.’ In this jungle we are not alone, we hike with some phenomenal creatures: orang-utans. And let me tell you, these ladies are some characters. 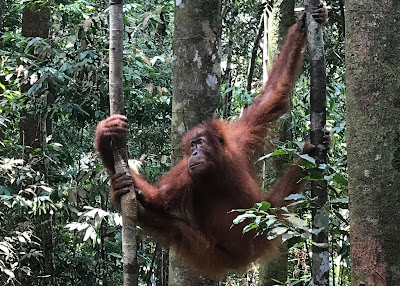 We are in Gunung Leuser National Park in North Sumatra, more specifically in the environs of Bukit Lawang. For years I have wanted to do a proper jungle trek with the children, camp out it in the bush, and this place offers something that I hope will entice my offspring to hike six hours a day without moaning: the chance to encounter both semi-wild and wild orang-utans. 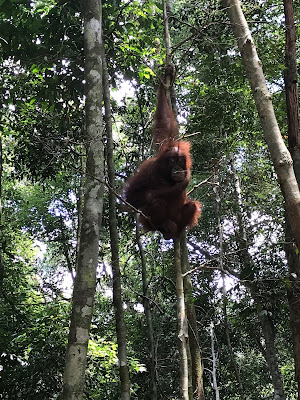 And we are not disappointed. First we run into Ratna, a semi-wild female and her baby. There used to be a rehabilitation centre in Bukit Lawang, which closed years ago as the forest is fully populated. The reintroduced orang-utans stay close to the village, and humans, as that is what they are used to, thereby creating an excellent opportunity for eco-tourism. The rehabilitated apes are mostly females, who mate with local wild males. But unsurprisingly, there are also problems with human orang-utan interactions. This is after all Indonesia...


Thankfully our guides (unlike some…) are very responsible and explain how we should never get too close to the orang-utans, and they never feed them or leave trash behind – in fact, on our second day we had to postpone our lunch for hours when a wild orang-utan kept following us and we could not sit down and dig into our excellent fried rice and noodles. The orang utan would likely try to steal our food if we did; one of the park rules is that you cannot eat within sight of one of them. The children weren’t sure whether to be annoyed with hunger, or amazed by the attention of our stalker.

But, as out guide Tara explained as we walked on, he had one exception to his strict no-feeding rule: Mina. If we we would meet this fearsome lady, he would likely have no choice but to feed her, as Mina was known to become aggressive. He had scars to show for that, a large slash on his lower leg caused by her bite. So when Tara mentioned we  were entering Mina's territory (orang-utans are solitary animals that stay in a set area), lo and behold, there she was, standing in the middle of the path with an upheld hand to demand her toll. Tara carefully doled out sunflower seeds whilst the other guides herded us past swiftly and safely. Mina, with her scarred face, looked imposing and to be honest, rather scary.

The other orang utan Tara had mentioned by name as one to watch out for was Jackie. Jackie had been reared humans as a child, and was rescued and subsequently released here over a decade ago. Like Mina, she longed to be with humans, but food was not what Jackie was after. Jackie, Tara explained rather mysteriously, 'liked to hug.'


So when we approached Jackie, after the rather fearful encounter with Mina, I was a bit apprehensive about this ‘hugging’. And rightly so, as when the guides cautiously guided us past her, I suddenly felt a tug on my arm. Before I had time to realise what was going on, Jackie managed to grab me firmly by the hand and pulled me towards her. Orang-utans have amazing strong grip! The soothing voice of Tara told me to stand still, and not worry. Jackie yanked me down slowly, forcing me to sit on the floor next to her. The guides tried to distract Jackie with snacks that did not interest her in the least, so I continued to sit there, with the rest of the family laughing at me. Jackie looked at me with big pleading eyes and it took me a lot of restraint not to give her a full bear-hug. Human attention was clearly what this lady craved. We sat there for what must have been at least twenty minutes. Every time I tried to pull my hand free, Jackie's leathery fingers would close tighter around my arm, the bristles of her hairy arm tickling my naked one. Looking into Jackie's calm, sorrowful eyes allowed to let me keep my cool, that is, as cool as you can be after a wild animal has wrestled you to the ground...

After I was finally released, thanks to many snacks and plying words from Tara, we hiked on, as much in awe of these creatures as ever. We saw several more wild orang-utans and their nests. The wild orang-utans stayed clear of us humans, in the safety of the high trees, exactly as they should.

Orang-utans are not all there is to see in Gunung Leuser Park. During our three day trek we saw lizards, giant ants, butterflies, all sorts of greens and majestic sceneries. Our first evening camping by the river we spotted a group of Thomas Leaf monkeys (called Beckham monkeys by the guides, can you guess why?) bathing together with us in the river.


We were unimpressed by the long-tailed macaques (we can see these every day in our own garden), but the baboon-like pig-tailed macaques were exciting, if not a tad intimidating. Building dams whilst washing up in the river, eating the most amazing Indonesian food cooked by our guides, and sleeping in the sounds of the screeching jungle – all in all an amazing experience.

The next day Tara, impressed by the speed and endurance of our children, decided we were fit for the long steep way. It is beyond me why, but on a normal road my children lag behind needing constant urging, yet on a steep mountainous jungle trek, with only tree roots and lianas to pull you up, they rush up leaving me short of breath. The steepest of climbs offers the highest rewards: from the top of Orchid Hill we had an amazing view over the Gunung Leuser Reserve and its flowing hills. That evening we had just arrived at our new camp and were having a quick bath in the river when the skies broke; a big thundering storm made the river we had just swam in bulge from of its course into a thundering rage.

It was a simple tropical storm, one like we are used to at home in Singapore, but deep in the jungle, under the sagging cloth of our tent roof, we were very much in awe, and a tiny bit of fear. And not without reason: not long ago flash floods caused by illegal logging upstream had swept away most of Bukit Lawang village – a story that makes us firmly aware of the brutal forces that get unleashed when we humans interfere with nature. We sat in our mostly-dry shelter munching snacks and drinking sweet hot tea and kept our fingers crossed it would eventually stop – if the river would not calm down we would it be able to tube down it the morning after. Thankfully we woke up to yet another beautiful day and we floated down the river back to the village.


Our experience with the magnificent Mina and Jackie left me with mixed feelings. These semi-wild orang-utans were spoiled for life when they were taken from their mothers as a baby and raised by humans. After rehabilitation they lead good lives; they roam in their natural habitat and by reproducing with local wild males help preserve the species. Because they are comfortable being up close with humans, the animals have become a tourist attraction. This has many complications, as Tara's scars and Jackie's hugging habit prove, but at the same time eco-tourism plays an important role in providing income for the local community and the preservation of the forest. Eco-tourism promotes awareness on the importance of nature conservation, without it and the money it generates, this area would have been likely turned into palm oil plantations like so much of Sumatra has.

I hope that Mina, Ratna and Jackie can all continue playing their part in preserving all the important species that live in the Gunung Leuser Nature Reserve. Meeting them has been a privilege, on that taught us a lot about both nature and humans.