Lots of cats and a snake 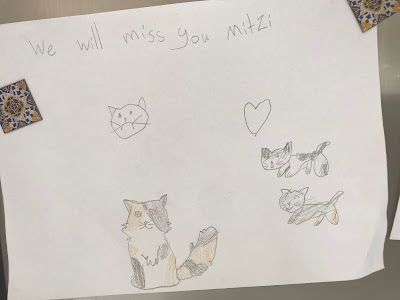 A few months ago I wrote about the wilder, more dangerous aspects of black and white living and owned up to my fear of snakes. It turned out my fear of snakes was completely warranted. This summer our cat Mitzi disappeared and guess who our number one suspect is?

Traffic is slow in our area which means there are few road kills. And since she has been micro-chipped but not found anywhere we can only fear the worst. Pythons are known cat killers and who did we see slithering on our drive not long before she disappeared?

We did not plan on getting a new cat. Sure, the increased amount of rats scuttling across the terrace had me tempted. But we still miss Mitzi. And I felt a bit guilty about not heeding the advice of the charity where we picked up Mitzi to keep her inside – which would have been sheer impossible anyhow since we basically live outside. And I feel that keeping a cat inside is akin to animal abuse - better enjoy life to the fullest and die happy than wile away being safe. Still, no charity in their right mind would give us a cat now.

Of course fate intervened. One day my ears pricked up when zonked on the sofa in front of Netflix. Did I hear Mitzi? I rushed outside and found Indah with a bowl of cat food and a little black feline. We’d seen the cat around – there are many strays in our area – but usually Mitzi chased her off. The next morning Blackie came back and played with the kids all morning. They got very excited and begged to keep her. After checking with all the neighbours she was in fact a stray I gave in. But we never saw her again after that week.

So we went on with our happy cat and stress-free existence until Indah’s friend kept WhatsApping us photos of two little ones in need of a home. Their mother was a local stray that had given birth in her garden to a litter of six. They spayed the mother and released her back into the wild. One of the babies died, one ran way, two got rehomed. There were two left. They had been vaccinated, taken care of lovingly but the employer did not want to keep them. What else could I do but take our cat carrier and drive over? 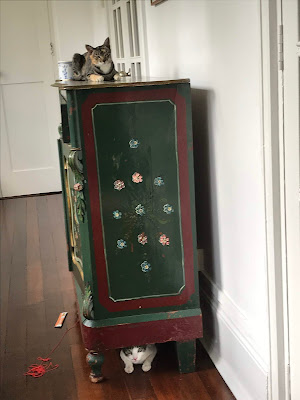 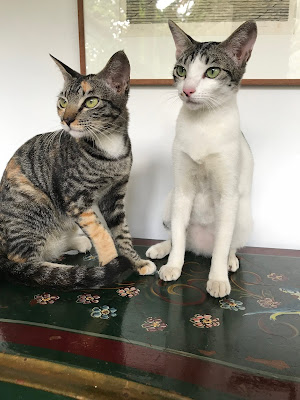 So now we have to seven-month-old kittens. Two sisters that immediately got diarrhoea – either from stress, new food or poisonous plants – and were locked in a very smelly side room for the last week. Since they seem to have finally remembered what potty training is all about I just let them out and as I write they are frolicking around and creating havoc in the house (they won’t go out for at least a few weeks, until they are not only settled but spayed – two cats is more than enough, thank you very much). They dig up houseplants, jump on every available surface, practice their piano skills, run full speed and fight endlessly. Since they are also the most sociable, cuddly and affectionate cats I have ever seen and unlike Mitzi are up to being manhandled by the steady stream of playdates coming to admire them, we forgive them. They have been here for only a week but already we can not imagine our life without them. So I am proud to introduce what Roel so elegantly calls our new python food: Pepper and Snowy.

All that is left now is to keep our fingers crossed and hope they will outrun the enemy.