To meat or not to eat?

A question that has been on my mind for a while is: should we eat less meat? In this article, that I wrote for The Magazine by The Hollandse Club Singapore  I'm looking for some answers.

Over the last century global meat consumption has steadily gone up, and with new parts of the world developing and being able to afford more meat, this is only expected to increase in the decades to come. Everyone loves meat. So why is that a problem?

Traditionally, people have become vegetarian out of principle - because they do not agree with killing other creatures, or the way in which animals in the modern meat industry are treated. Some do so for health reasons; meat consumption has been linked to a higher risk of cancer, diabetes, high blood pressure, obesity, heart disease, osteoporosis, kidney-, and gallstones. 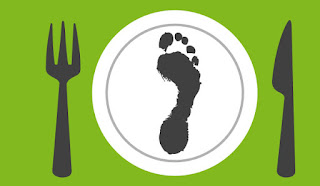 In the last few decades, another more pressing reason to eat less meat has emerged: the global animal industry produces more greenhouse gas emissions than all cars, planes, trains and ships combined, making up an estimate of 15 to 18% of global emissions. Burping and farting cattle emit methane, a 20 times more powerful greenhouse gas than CO2.

Almost all scientists agree: climate change is the biggest challenge the world faces this century. But acting on this knowledge is a challenge for most of us. Our expat life style with yearly intercontinental flights home, frequent weekend trips, swimming pools, and constant air-conditioning is hardly the most sustainable.

Luckily, there is one thing that Asia offers that can help us in our battle against climate change: delicious sources of vegetable protein. Silken tofu, tau pok, tau kwa, as well as tempeh, seitan, miso, and natto. But many expats struggle to prepare these products, and stick to what they know. Which is, too often, meat. Let’s try to get creative, but first, let me explain why eating less animal products is important.

The ecological footprint of meat

Let’s start with some statistics:

* To produce one calorie of protein of beef, twenty-eight calories of energy – often from fossil sources- are needed. For one calorie of soy; only two.

* Raising animals for food is the biggest polluter of our water and topsoil, more so than any other industry.

Forests, the earth’s lungs, have the capacity to absorb CO2, but increasing stretches are cleared to become agricultural land, causing wild animals to lose their habitats. The majority of crops being grown worldwide are used as animal food, rather than being consumed directly by humans. It's more efficient to grow a crop and eat it, than to feed it to an animal as it builds up muscle mass, and then eat the animal. If meat consumption would be drastically reduced, all of humanity could be fed without the need for any more deforestation.

Throwing around figures like this is relatively easy, but getting the picture clear is much more complicated. Many studies contradict each other, and it can be very difficult to make the best food choices, especially if you want to take environment, animal welfare, and your own health into account.

A good way of looking at the environmental impact of a product is a life cycle analysis, where all stages of a product are taken into account. The results can be surprising, for instance one assessment done for packaged orange juice found that over a third of the lifecycle emissions came from just the synthetic fertilizer used on the orange groves. Often people think buying local will eliminate transport emissions, but in many cases 'food miles' actually make up a relatively small percentage of the overall carbon footprint. How the food is grown and produced is much more important.

So let’s all change to organic meat?

Yes, changing to organic or free-range meat will definitely improve animal welfare, and environmental pollution, but when it comes to land use and greenhouse gas emissions, these products are actually worse. Free ranging cattle take longer to grow, spend more energy on movement, and thereby emit more methane than stabled animals. Also, the efficiency of large-scale production can limit the amounts of energy and water used.

Non-intensive rearing of livestock, such as raising animals by grazing on marginal land, or feeding them waste produce, would be a way to allow meat-eating in lower quantities with less environmental harm.

There can only be one conclusion to draw from these facts: Eat less meat. The average American eats 125 kg a year, a Brit 80, and a Thai? Only 28.

Many people these days choose to eat one vegetarian meal a week, and slowly increasing that can give a significant reduction of your ecological footprint.

If you find completely meatless meals difficult, another way is simply to decrease portion size. In a pasta sauce, increase the amount of vegetables and add less mince. Rather than go straight to veggie hamburgers, start by adding a handful of lentils to ground beef, so you can gradually get used to the flavour and texture. Food preferences are simply a matter of habit. Can you not get your children to eat tofu? Coat blocks of it in crumbled cornflakes, and fry them crispy. 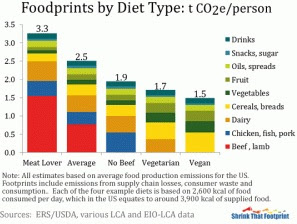 Of course now the question arises: what to eat instead? Fish? Fisheries typically emit less greenhouse gases than stables, but unfortunately we are rapidly depleting the oceans, and fish farms have many issues of their own. And the production of cheese emits about the same amount of greenhouse gases as that of pork, and more than that of chicken. From all the animal proteins, eggs rank the best when it comes to battling climate change. But they are still outranked by all vegetables.

The graph above shows that vegetable protein, like grains, pulses, nuts, mushrooms, quorn, seeds and soy are our best choices when we want to reduce our carbon footprint. If you see these products in the supermarket, and don’t know how to prepare them, why not whip out your smartphone, google the ingredient and a number of suggestions should come up.
It is true; going (partially) vegan can be daunting at first, but the wealth of information available online is a great help. Buy a vegan or vegetarian cookbook and by playing around, you will find that with a little bit of effort and creativity, vegetarian food can be immensely versatile, and often surprisingly flavourful. 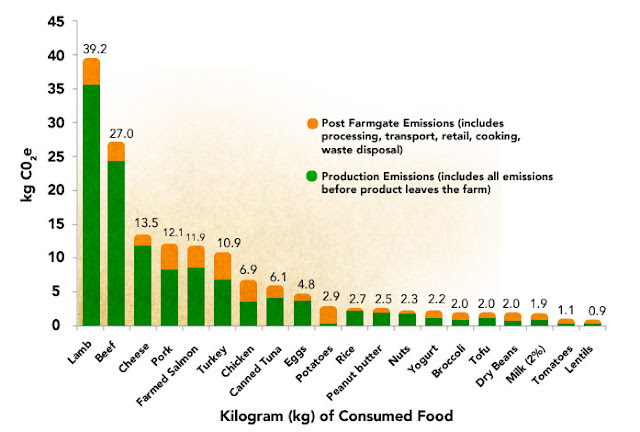