What we did on our holiday

This morning, as I was nit picking my four-year-old daughter’s classmates, I leaned in to the teacher asking Jasmijn how her holiday had been. I could not hear her answer, but the teacher’s response was clear: ‘Wow, you hiked up a mountain for twenty hours?’ He was suitably impressed. 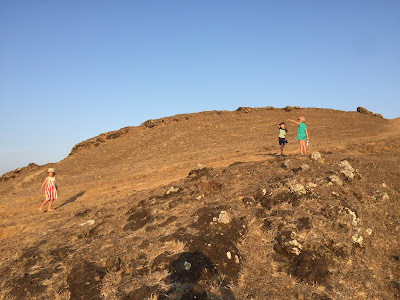 So was I, and I subtly chose a little head closer to her table to check for head lice. With wild gesticulations Jasmijn regaled of her other adventures, about how we first stayed in a room, and later in a little house on the beach, and that we went in a boat that had a glass bottom beneath which we could see fish.

Her big brother kept a diary of the same holiday, which makes an interesting read. It tells us what Tijm had for breakfast every morning, whether he had club sandwich for lunch, and who won with Monopoly Deal (he did), kwartet (the Dutch name for go fish) and the other card games we played. He adds, almost as an afterthought: ‘Oh yes, and I snorkelled with a turtle.’ 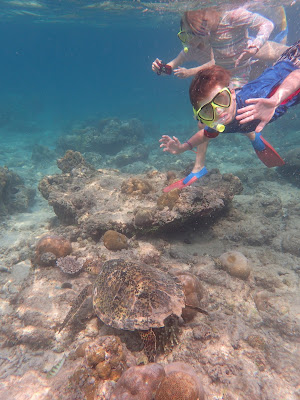 My own memories of this holiday are slightly different. We did hike up a hill, for about twenty minutes; from the top of which we witnessed one of the most amazing sunsets I have ever seen over the rugged shoreline of southern Lombok. 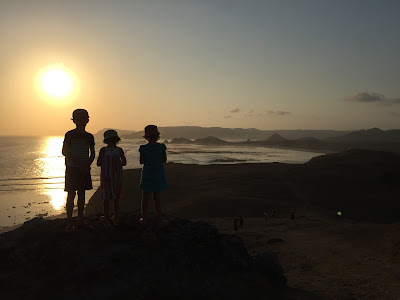 We relaxed on the beach, explored tidal pools, climbed more hills, played Frisbee with local kids on the beach, and ate some very tasty Sasak food. We saw traditional weavers, Sasak villages, and went to a tourist trap pottery. And we did play an annoying amount of card games, which I mostly lost. 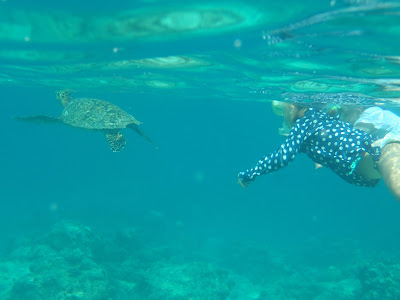 And yes, on the Gili’s we swam with sea turtles. Our first turtle encounter was on the snorkelling trip with the glass bottom boat. The guide jumped in, the rest of the group followed suit, and when the guide yelled ‘turtle’, we all swam over to chase the poor animal. With a lot of elbow shoving everyone fought to get a selfie with the unsuspecting creature, which glided on unperturbed, as if it did not understand what all the commotion was about. After several skirmishes I gave up, and decided to focus my attention on the colourful fish and corals, which were more than worth our time. And much more peaceful. 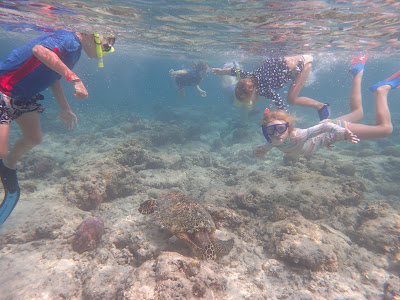 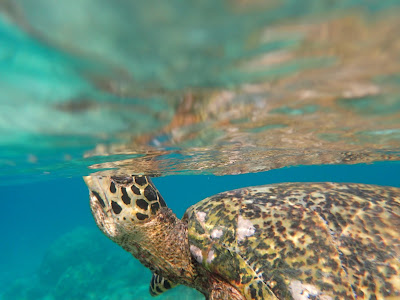 The next day we snorkelled from the beach of our hotel, and found our very own turtles. We followed one around for almost an hour, grazing on the ocean floor, popping up for breath every once in a while. The amazingly graceful creature glided through the water, again not at all bothered by our kids swarming around it. Even Linde petting it, against my strict instructions, did not upset his serenity at all. 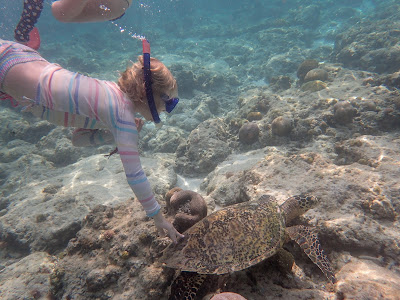 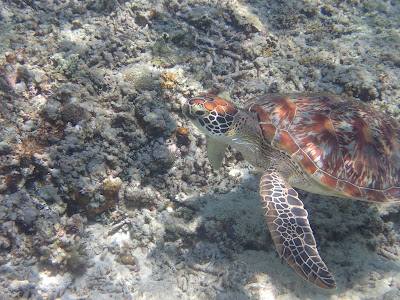 Everyone’s memories are different, but we all had a great time, fresh air, and plenty of sunshine in beautiful Indonesia. Back at Changi Airport we breathed in, coughed, and swore at that same Indonesia, where the fires still roar that pollute our South East Asian air. We enjoyed our outdoor time in Lombok, upwind from the fires, and brace ourselves for yet another period of staying indoors. Let’s hope the rainy season will start soon.