Pulisan is on the most Northern tip of this funnily shaped island. To get there we drive further and further off the main road, through increasingly small villages, over increasingly bad roads, until we stop at one close to the shore. From here we have to walk half an hour to reach the place we will be staying. Village ladies arrive to help with our luggage. I worry about the one labelled ‘heavy’ by the airline, but one of them lifts it on her head, just like that.

The hike leads us to paradise. White sand in front, jungle behind us, and a small area dotted with wooden houses in between, carved in the traditional Northern Sulawesi style. 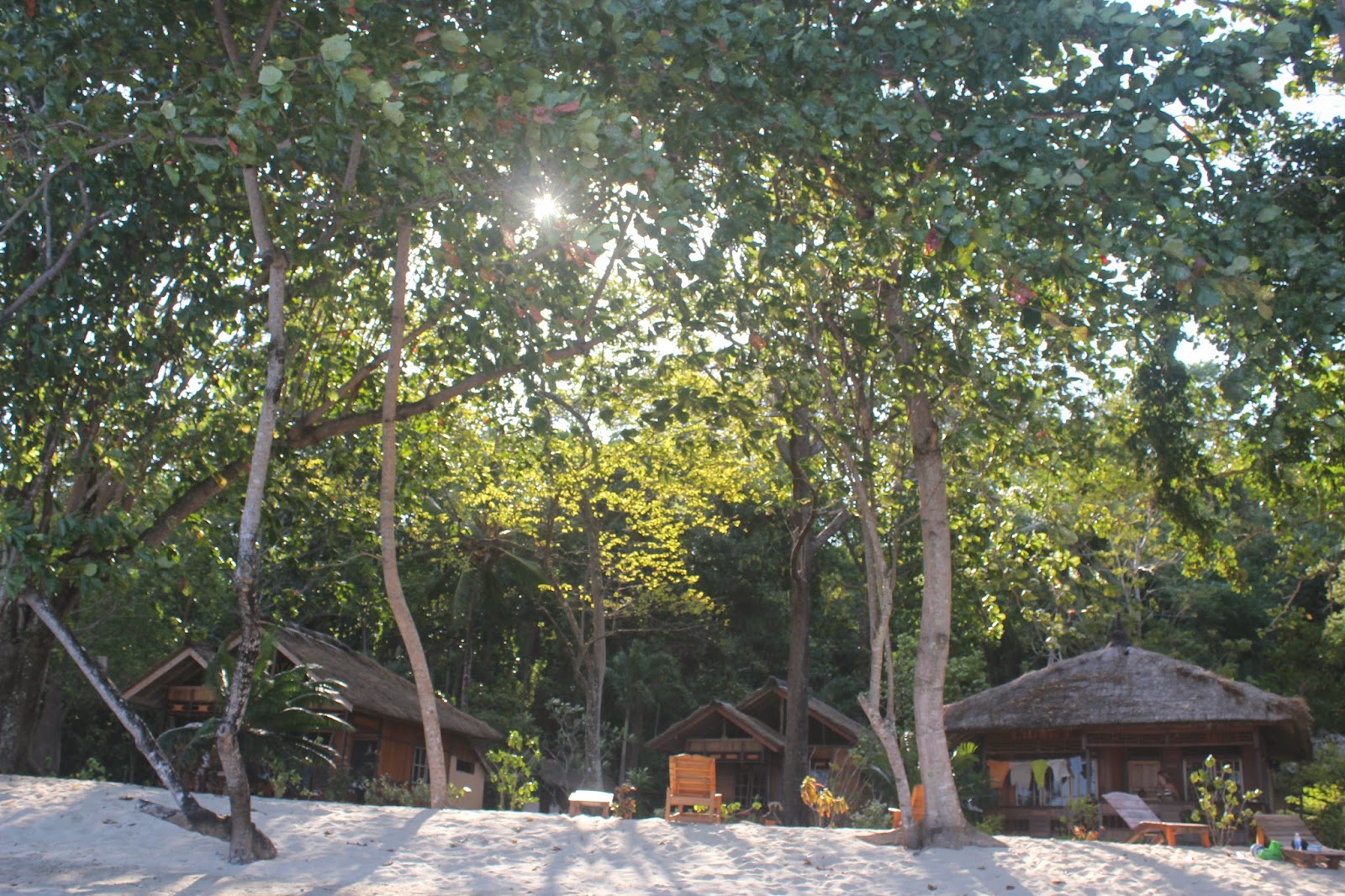 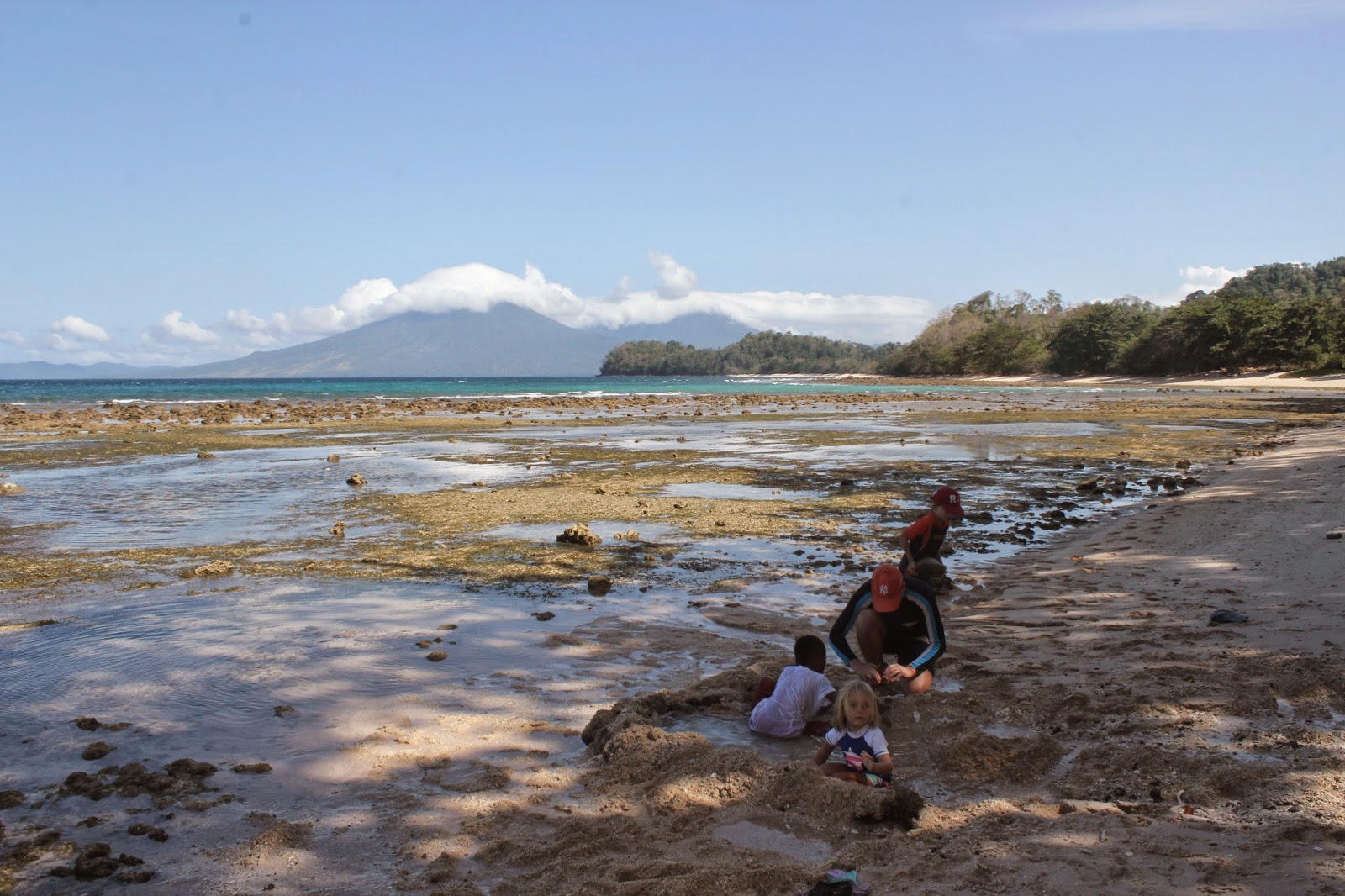 There is no swimming off the beach, as there is a coral reef just in front, but when the tide is low the whole area turns into one big adventure playground. All afternoon we scavenge around the tidal pools. Tijm meets his new best friend for the next few days, Xaver, a Sulawesi boy staying here for his school holidays. His mother works at a resort in the Highlands. Xaver’s English is limited, still they won’t leave each other’s side for the next few days. 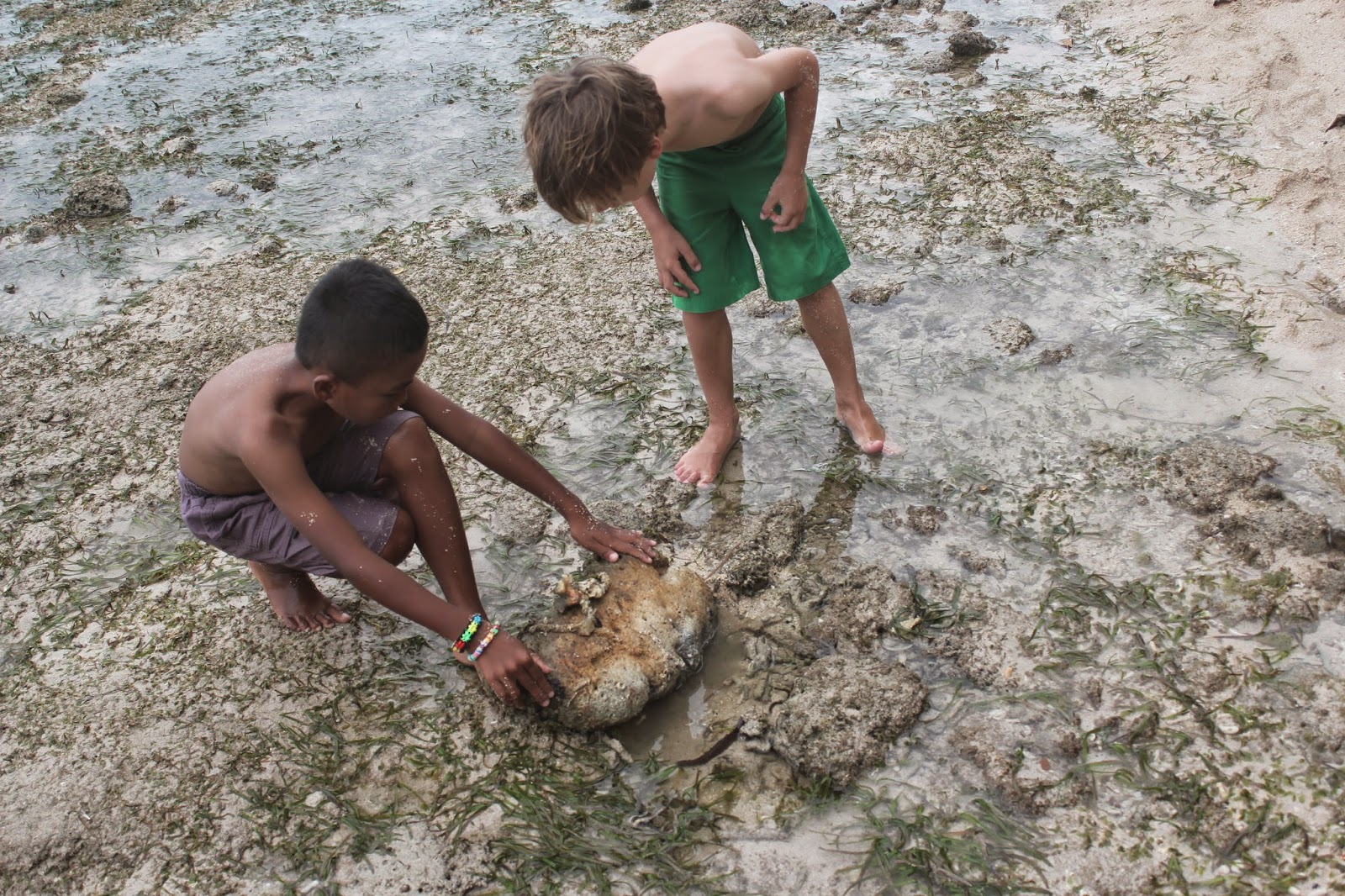 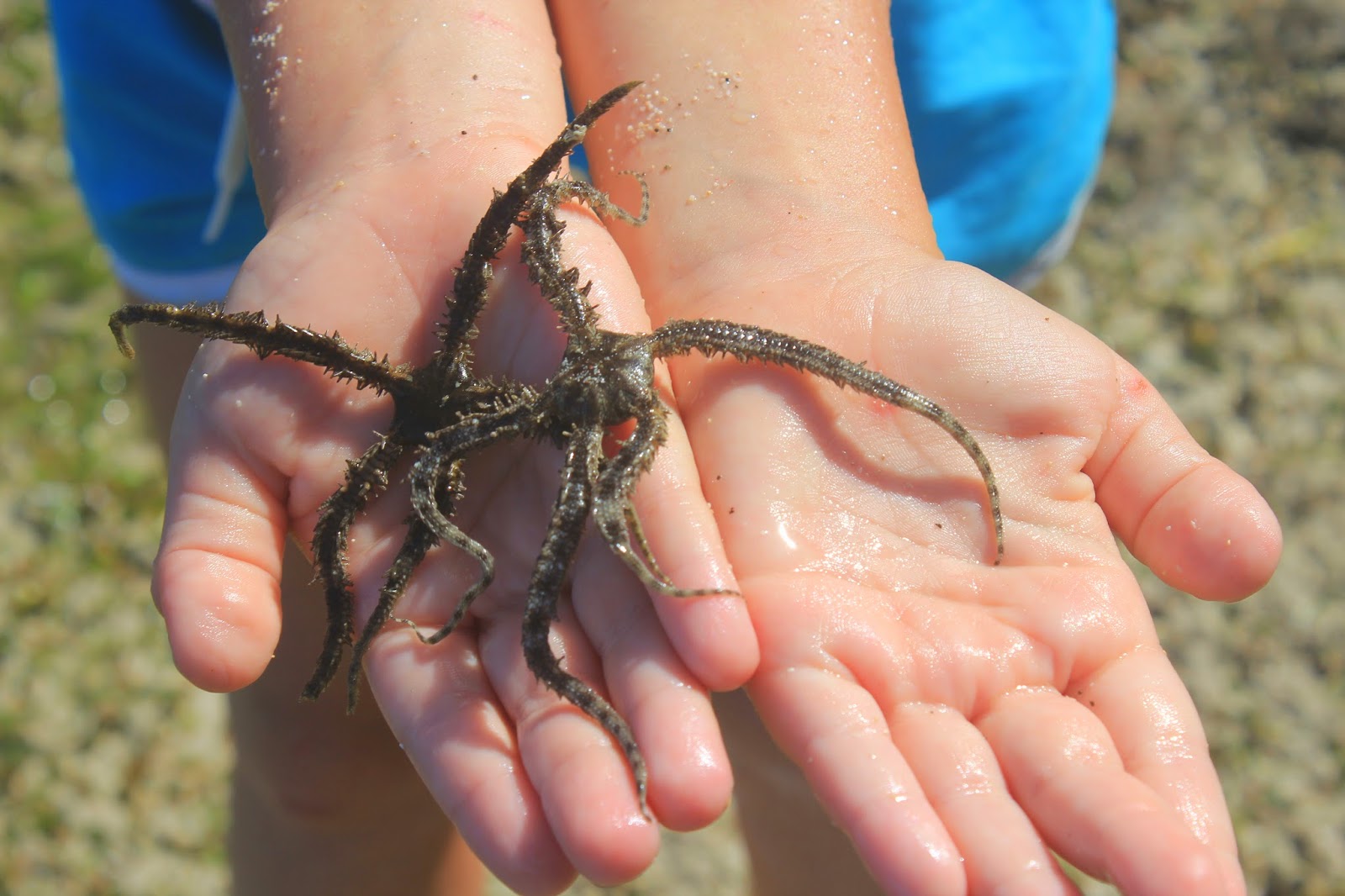 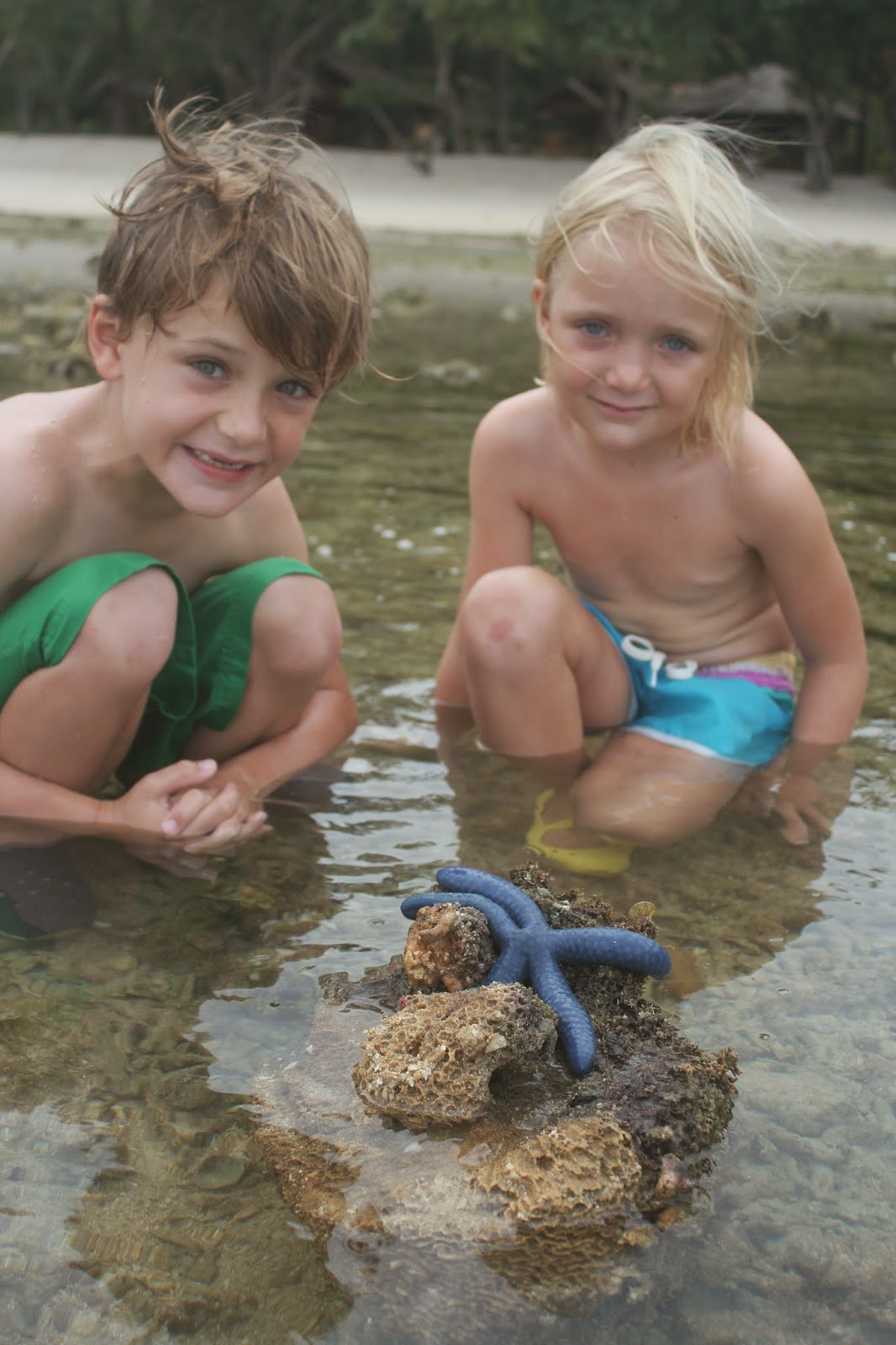 We build a pool by the sea that we defend to the upcoming tide, but the sea eventually swallows it, just as Tijm’s crocs, which he left next to it. 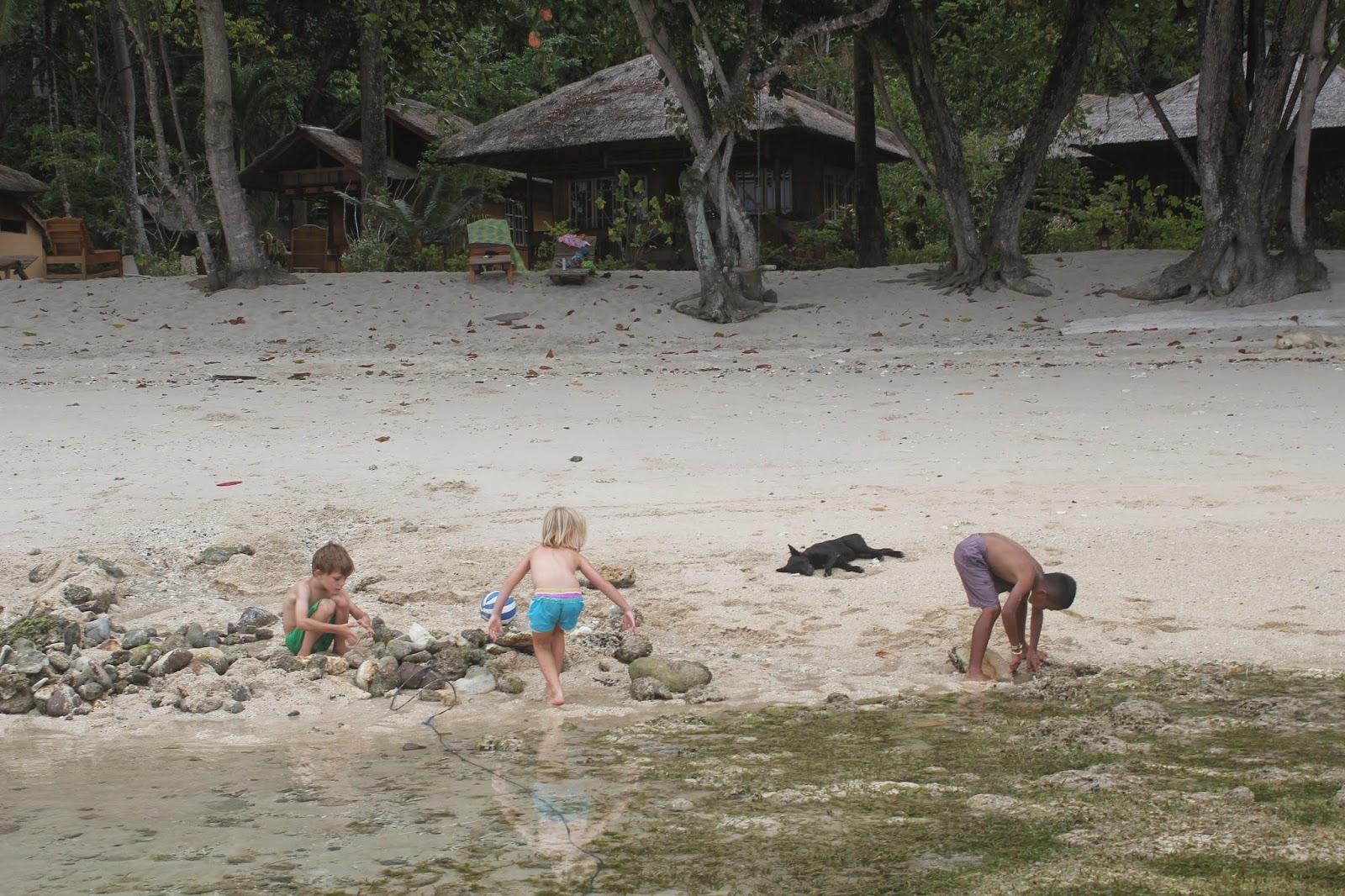 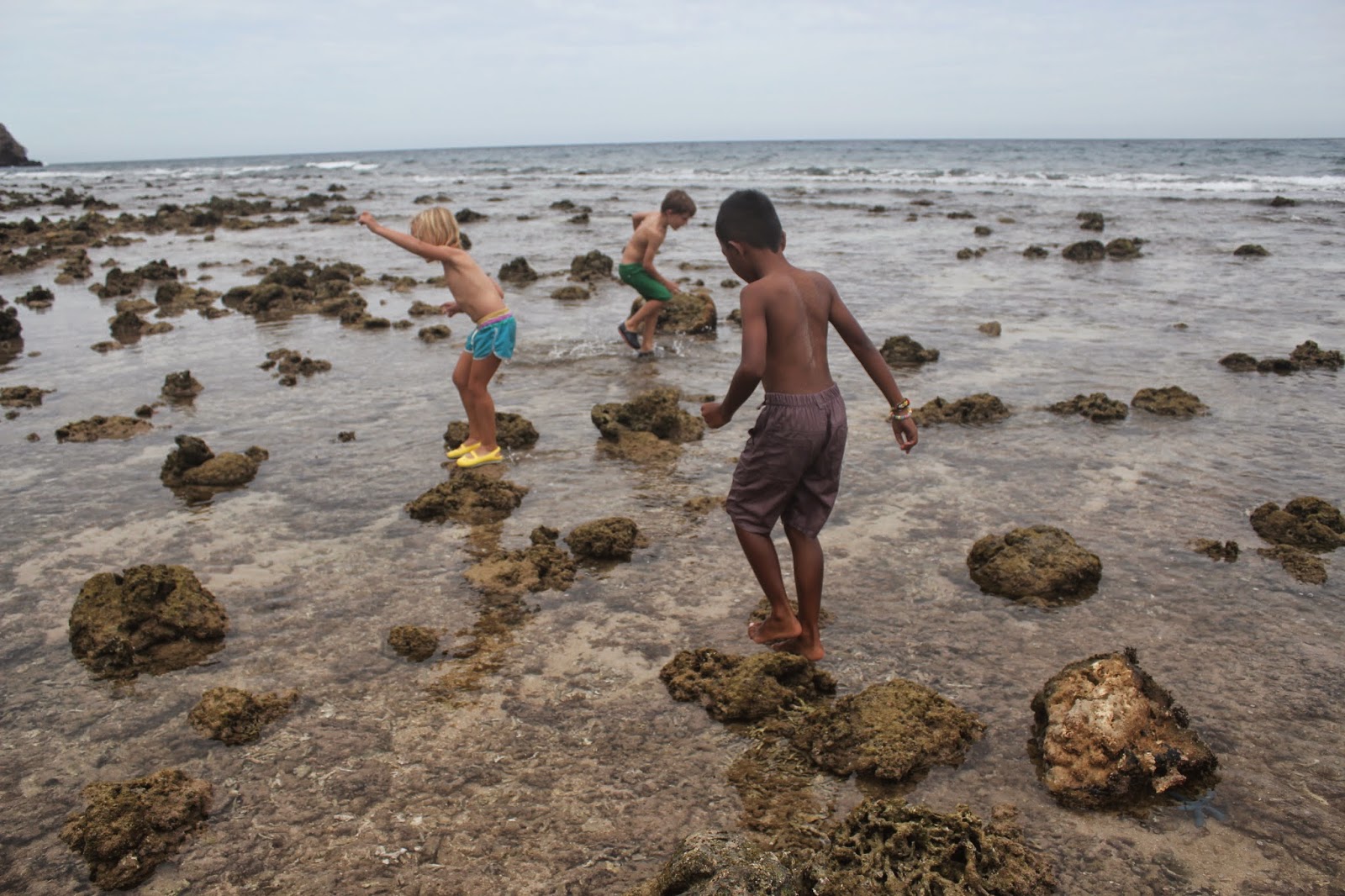 At breakfast the next day, Xaver is sulky and whiney. He feels glum, because we plan to go out snorkelling today. So we take him with us, with the promise that the boat staff, who speak his language, will help looking after him. We sail to another beach where we can swim and snorkel. There we wrap the kids in bright orange life-vests, and they float endlessly on the surface, gazing at the brightly coloured reef below us.

What do we see? So many coloured fish we cannot begin to name them, impressive corals in every colour and shape, numerous blue starfish, a black and white striped sea snake, yellow pointy ‘nose fish’, a small school of ‘upside down’ fish, anemones with Nemos (clownfish) inside, an impressively winged scorpion fish, Xaver’s monster fish, and much, much more. 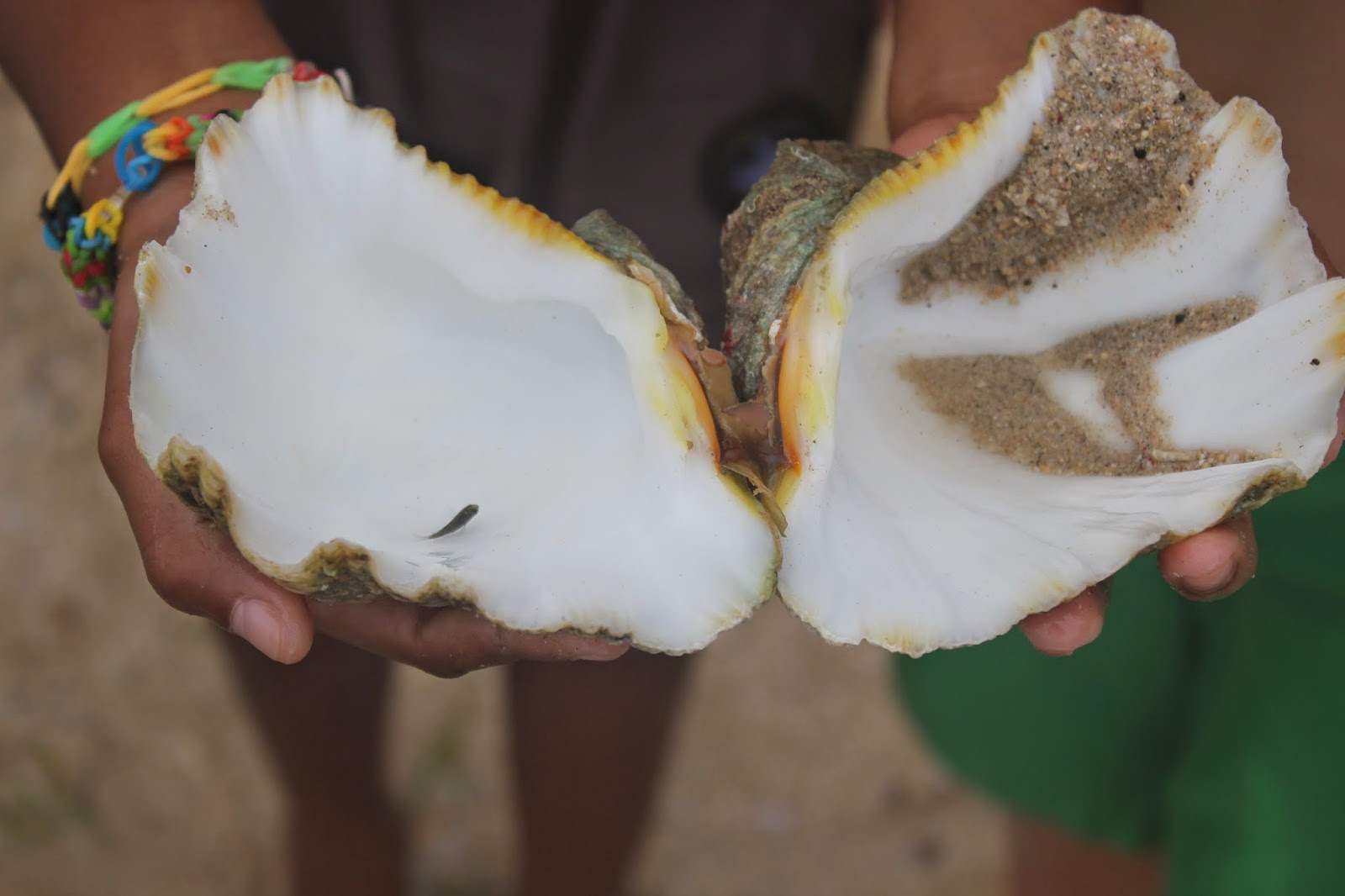 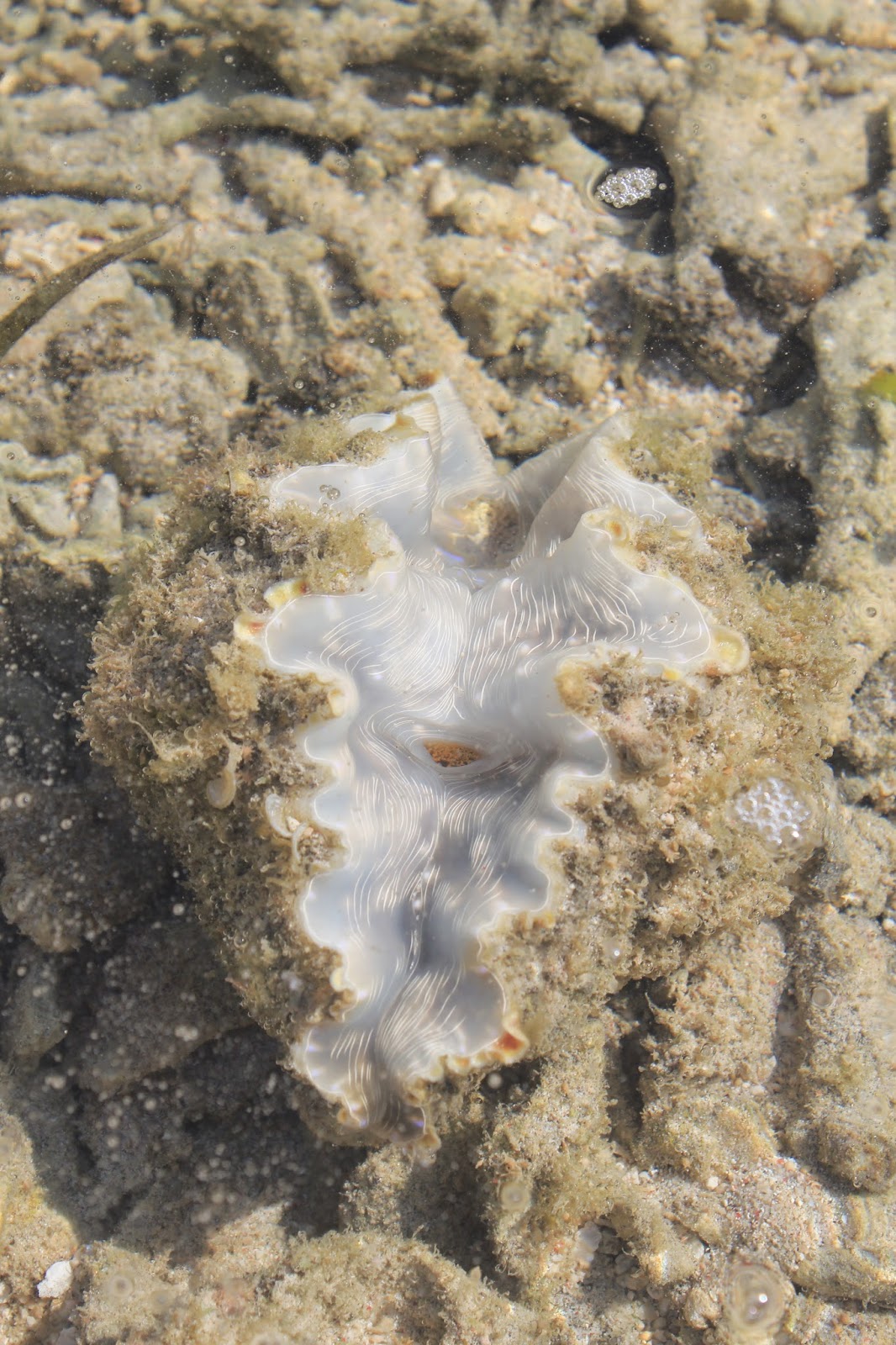 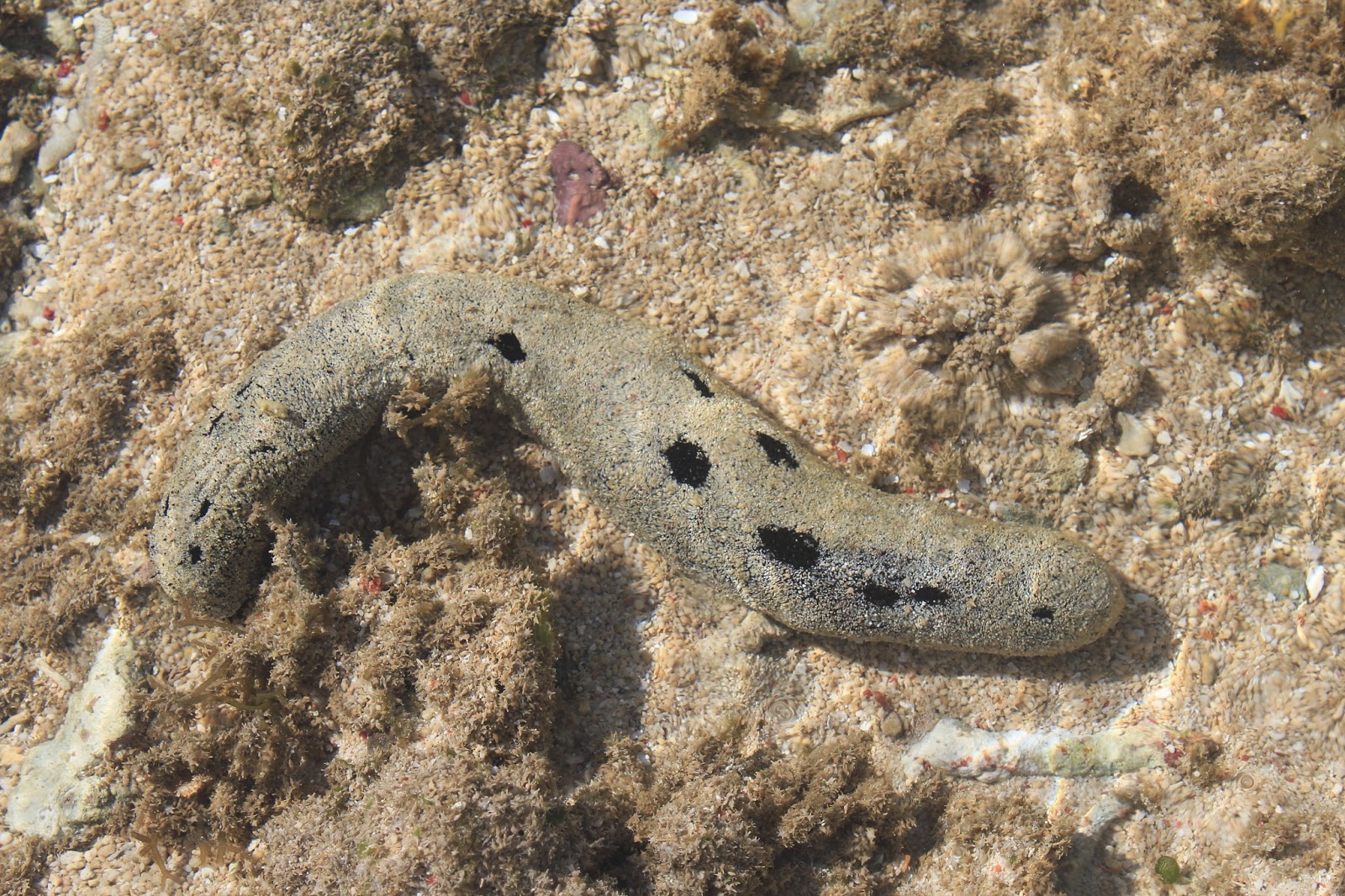 The afternoon we spend on the beach building sand castles and collecting shells and corals. We wander to the small village down the beach, where a herd of dark pigs rooting with their noses in the sand to search for crabs. In the distance looms yet another volcano. In the evening Tijm teaches Xaver to make rainbow loom bracelets, who is hooked instantly. 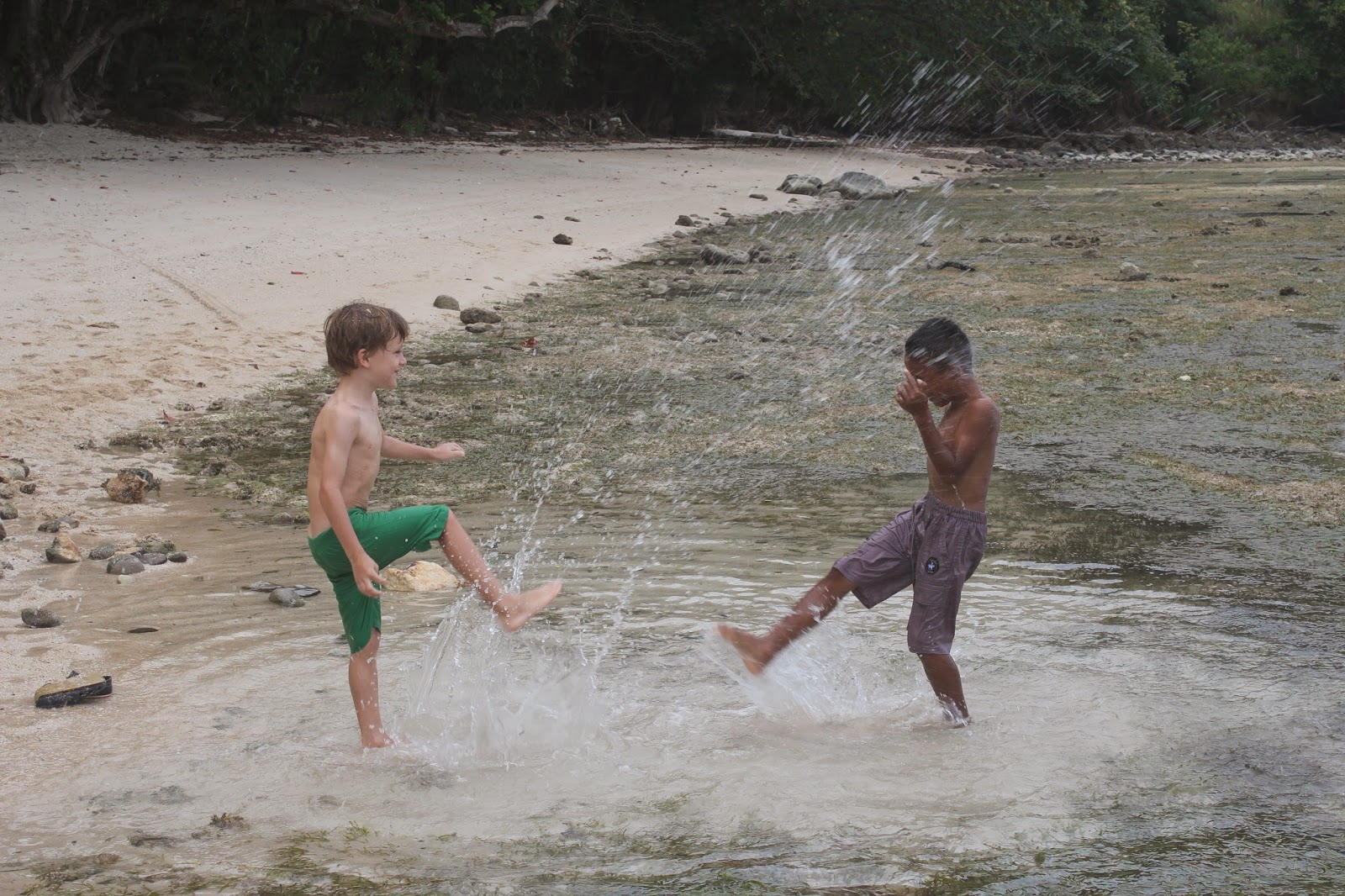 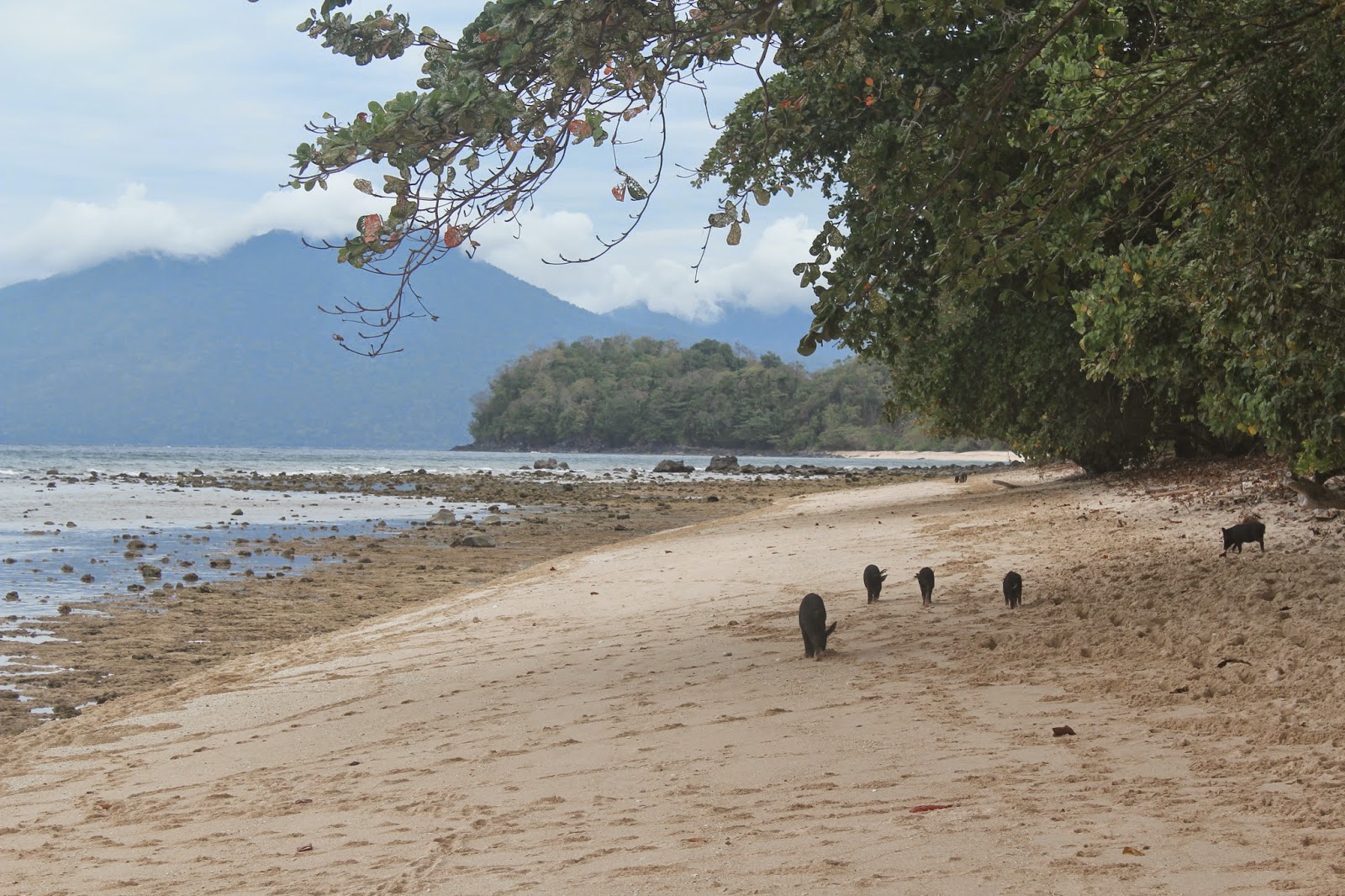 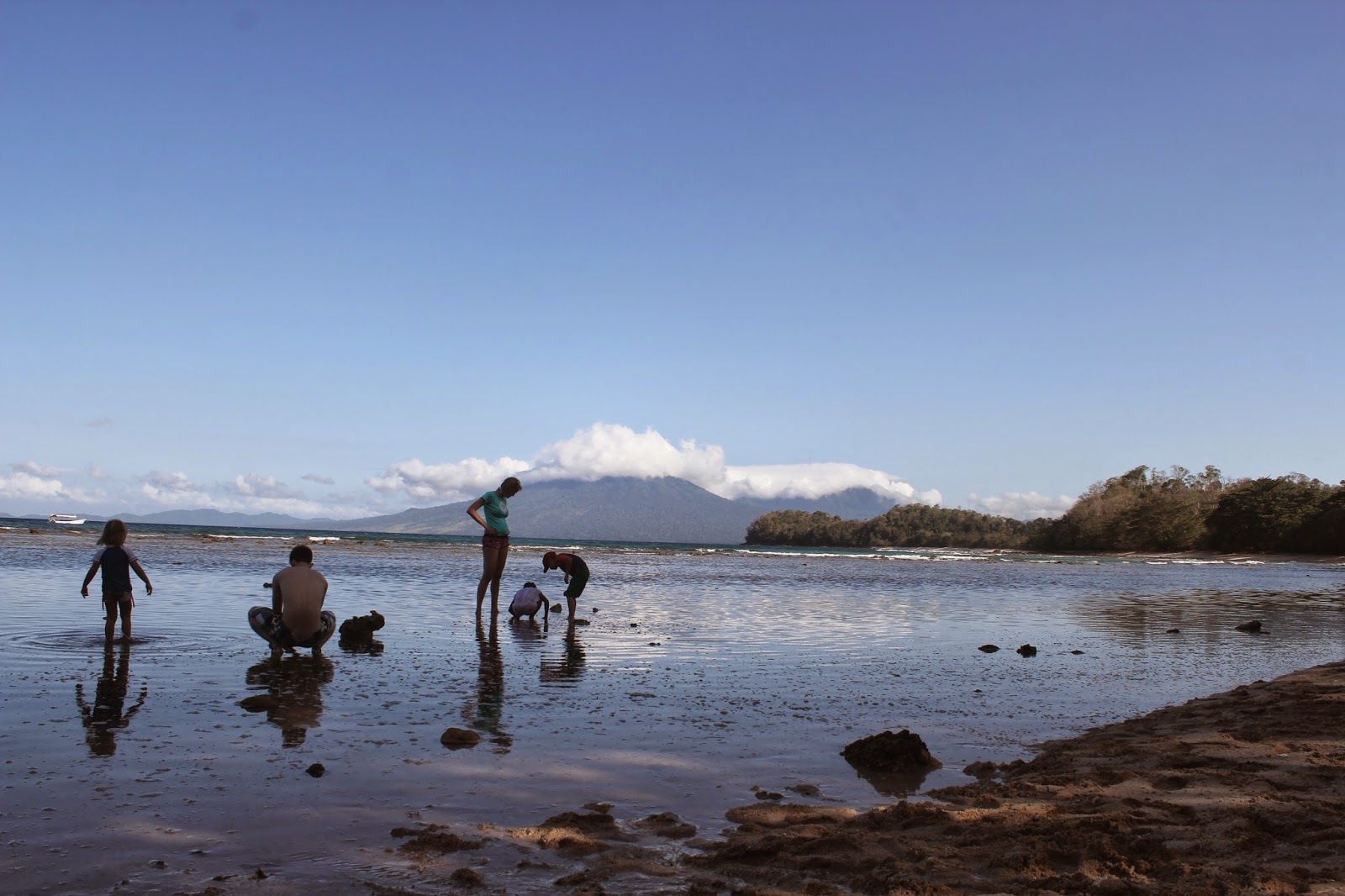 The next day, more snorkelling, at more amazing locations, with Xaver. We see why this area is famous with divers. In the afternoon we build a crab zoo, which we fill endlessly with hermit crabs that keep trying to escape over the rocky edges. 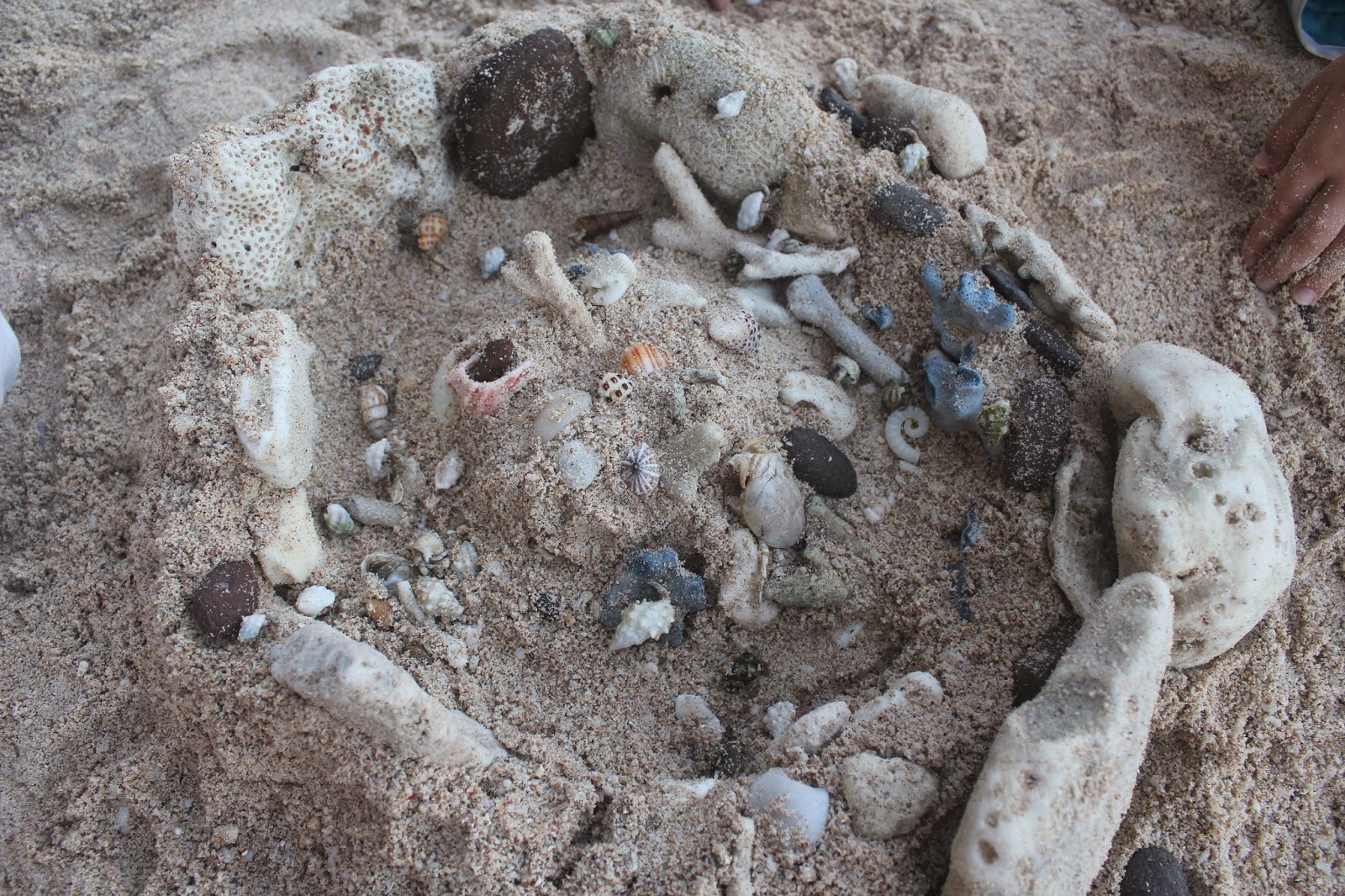 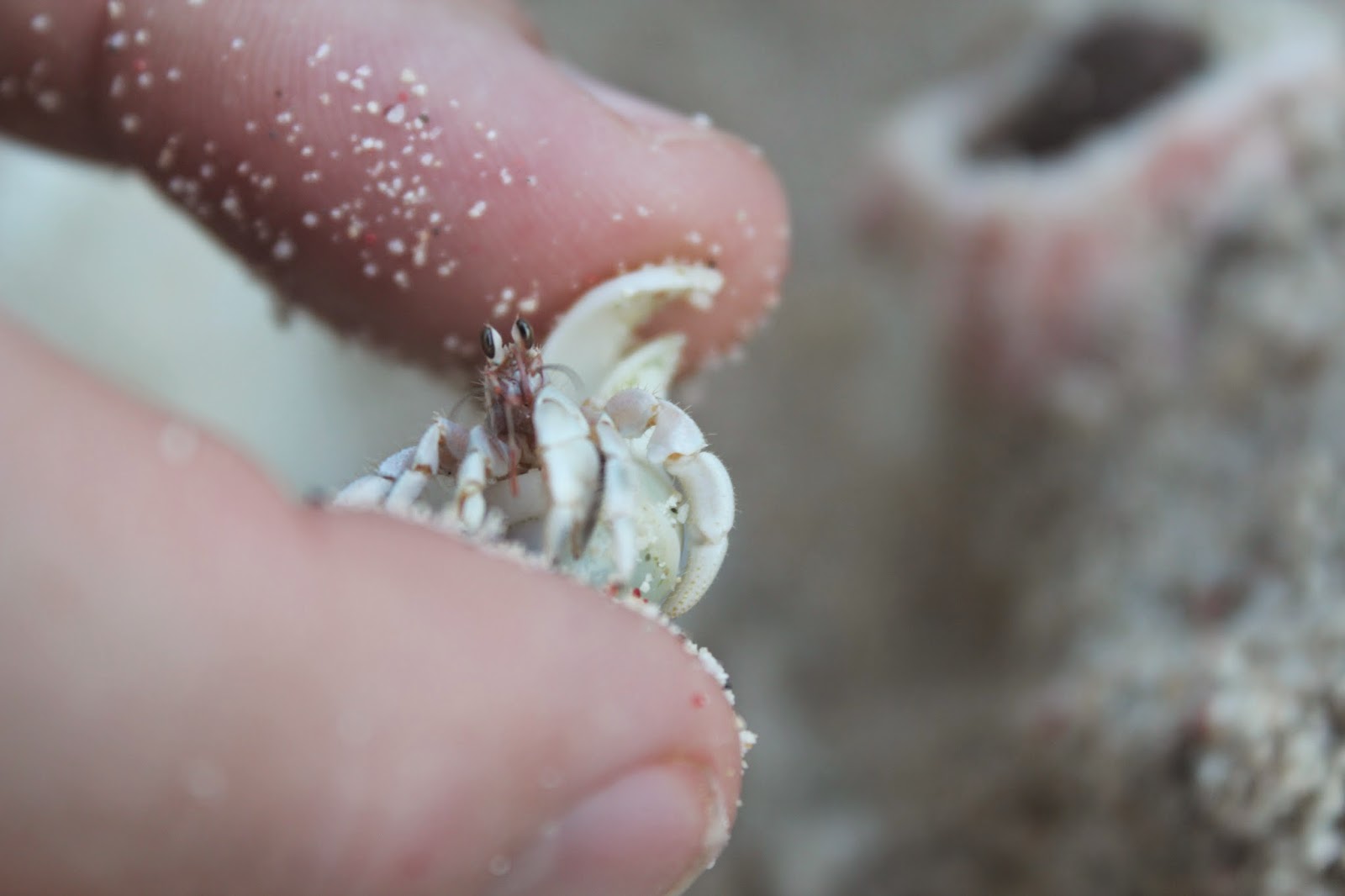 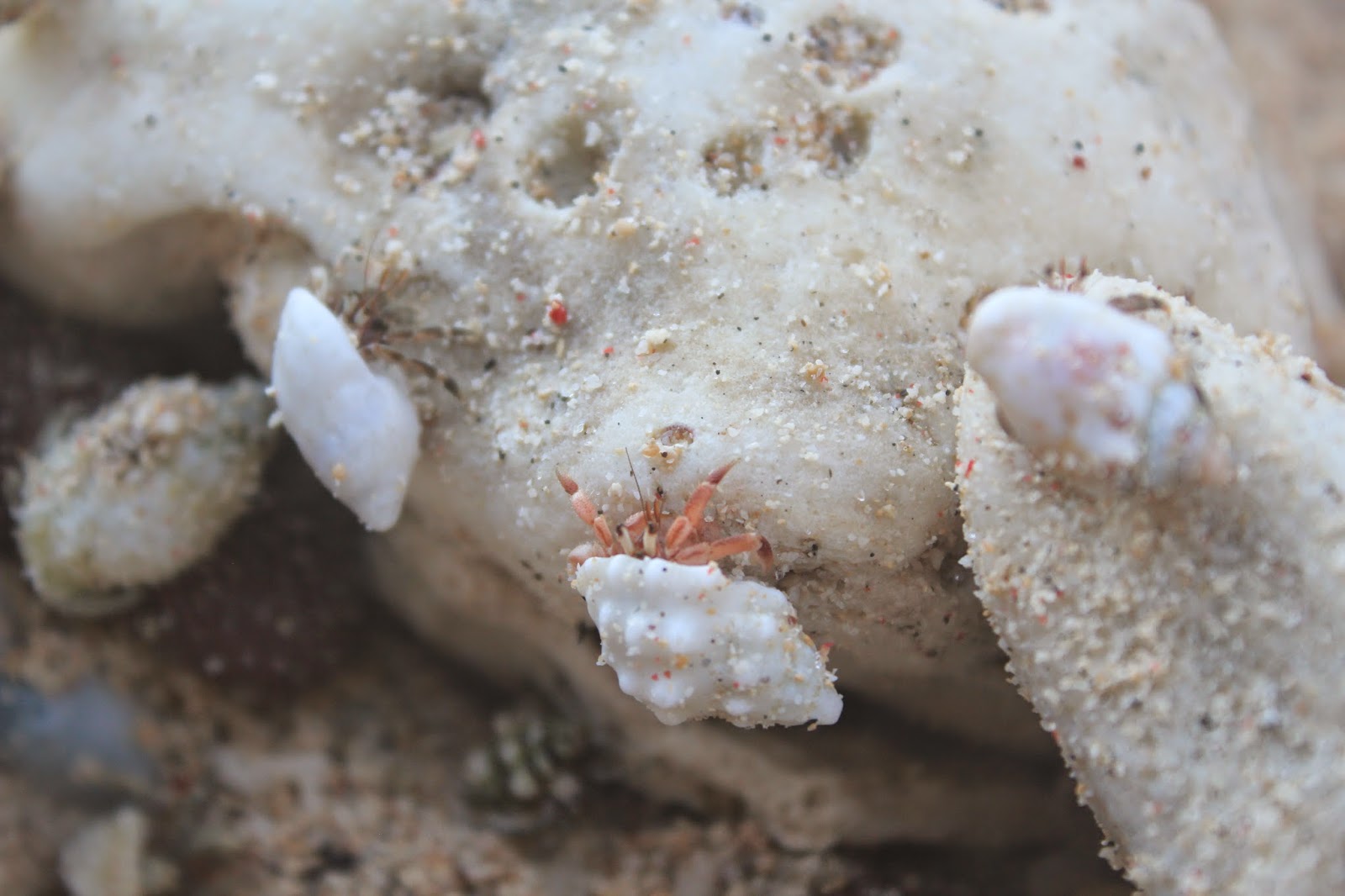 We are rested for the next lap of our journey: Java.
Posted by Karien at 18:26