When I was young it was punniken. I punniked all day with my friends, trying to make a record breaking length of … well… punnik-thingy-ma-bob. Nothing more useful than a punnik-thingy-ma-bob. Punniken, like thingy-ma-bob in English, is one of those amazing Dutch words that are impossible to translate. A dictionary would give you spool knitting, or French knitting, but those don’t do at all. Punniken (pronounced puhn-nick-an), merges frunniken (fiddling) with pulken (picking, as in picking one’s nose, or a scab), and does not need any explanation. I had not used the word for several decades, but writing it down just now, I realised it is one of my favourite words. But I digress.

When I was young it was punniken that was the rage. Today’s fad is not that much different; it is just executed in plastic. And on a loom, although an old fashioned knitting dolly serves as well. Rainbow loom is every bit as addictive as punniken, and worse. Making gazillion bracelets out of the colourful rubber bands was only the first step. Soon, we progressed to flowers, snakes and lizards. 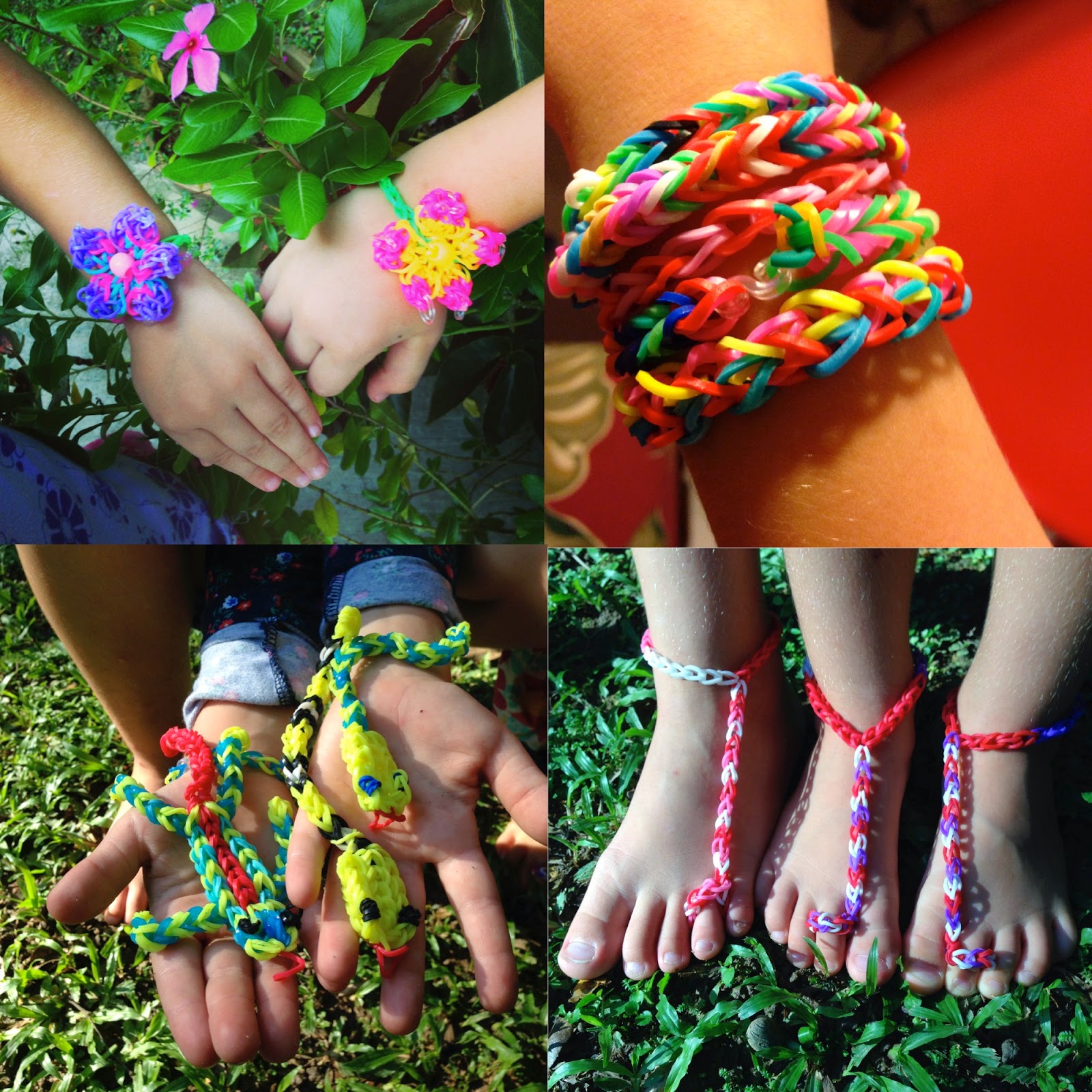 When papa came home finding his wife and offspring amidst a heap of colourful rubber, he cried out that rainbow loom must be the most pointless thing ever. He picked up a looper, and refused to give it back. ‘Wait, I am not done yet!’


One can rainbow loom at many different levels. The kids make simple bracelets on their fingers, on two pencils, the plastic knitting spool, or even a fork. More complex designs are to be done on the loom, instructions for which you can follow, band by band, online. In fact, it was before we even owned a loom, when they watched a fifteen minute instruction video in total silence, that I knew there was no way back. 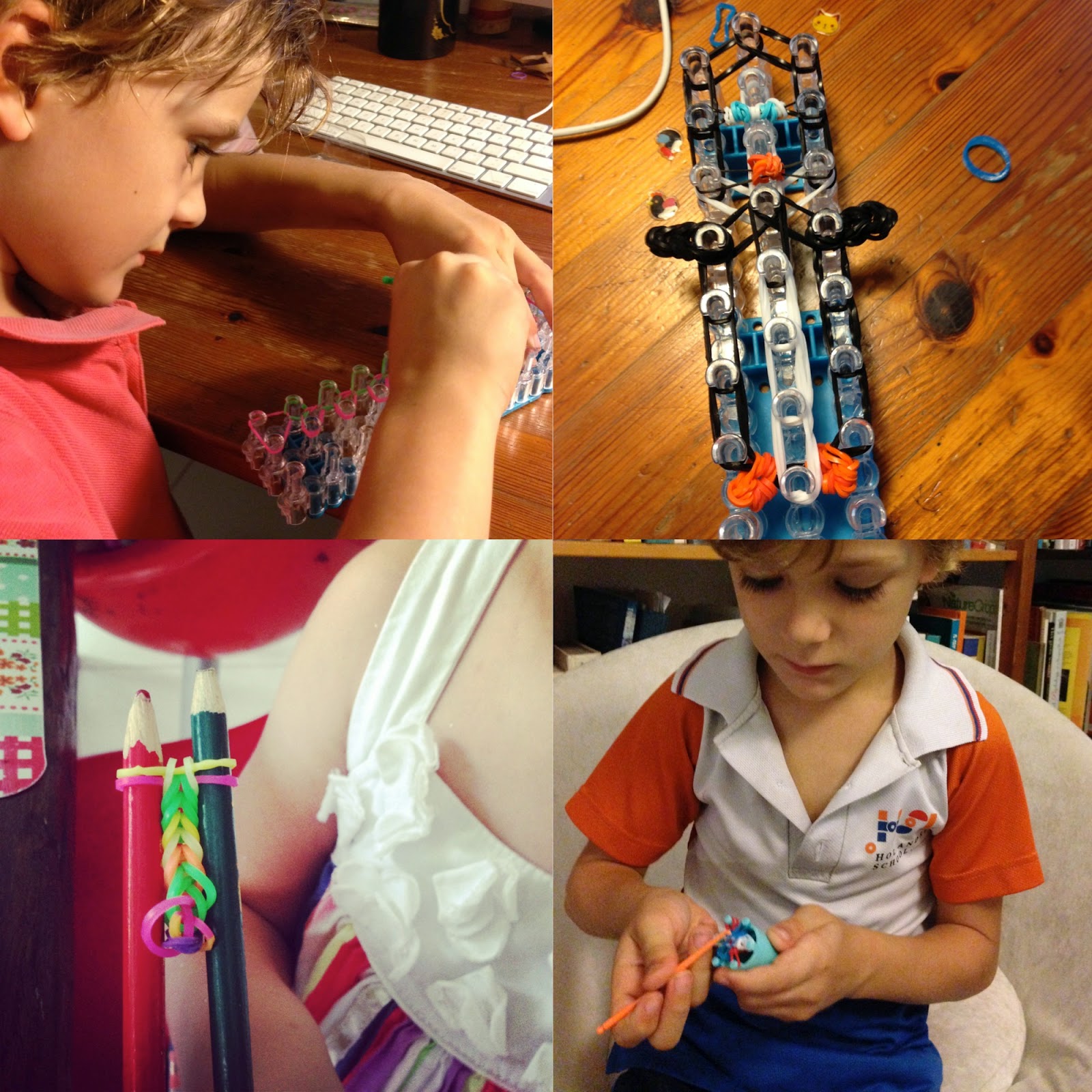 ‘Mama, I want to make a mouse.’
It is an easy guess who found herself fervently looming mice, lizards and hamsters, long after the kids were sound asleep in their beds.

A few weeks later Jasmijn, at three, can set up a ‘triple single’ on the loom with cap bands, needing mama only to loop the thing with the looper (which normal people would call a crochet hook). Suddenly I find myself excited about Elsa, Anna and Spiderman knitted out of rubber bands. Penguin, anyone? Just to prove that rainbow looming is a lot less pointless than, well, punniken. 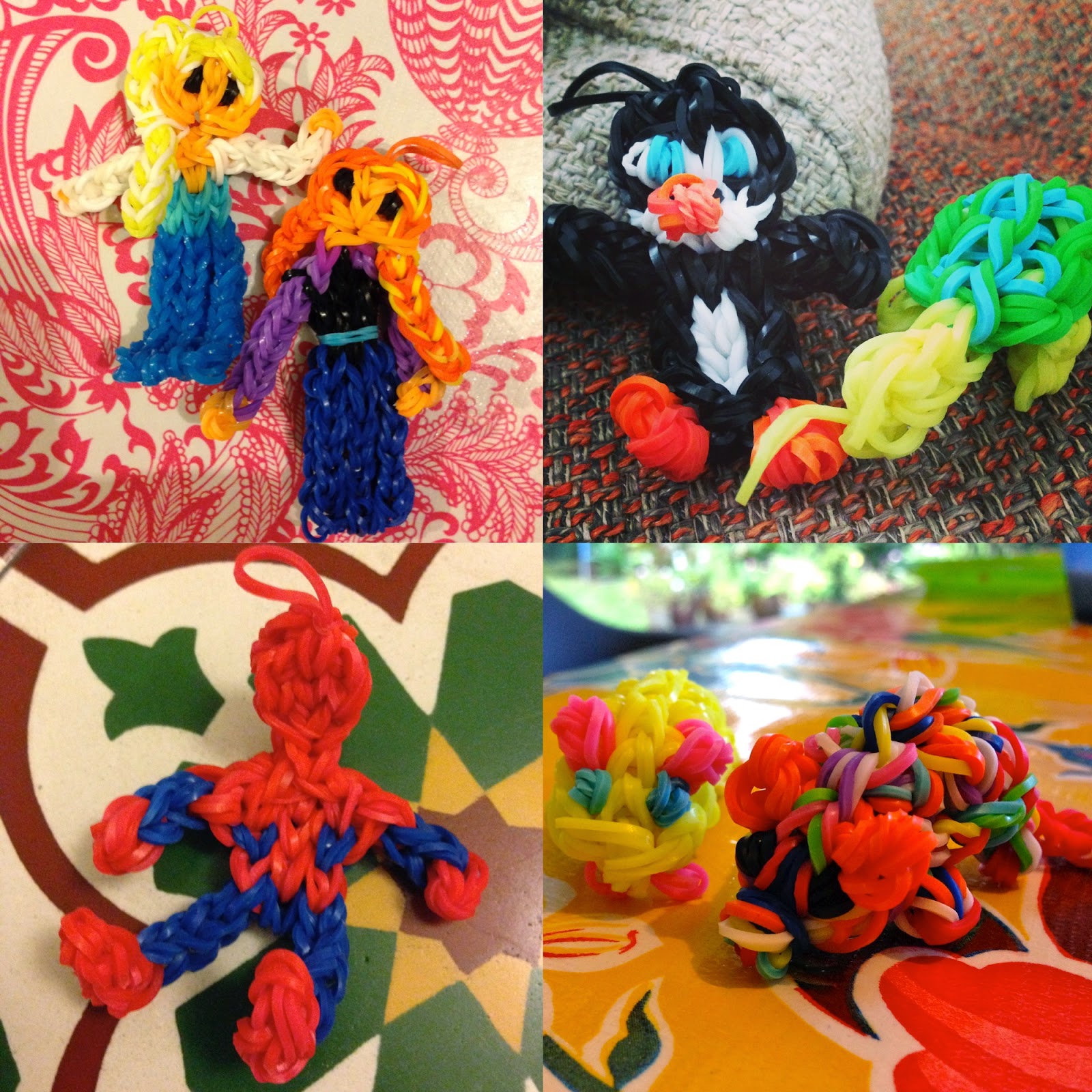 So our summer holidays unravel. The Ipad and TV have never had as little use, and even Lego and Kapla were neglected until the rubber bands, alas, were finished. The house was strewn with bracelets, necklaces, hairbands, charms and figures, until Tijm had the brilliant idea to combine all into one super chain that goes around the room, and back, quite possibly beating mama’s childhood punnik-record. It definitely impressed his friends.

The end must be near, as nothing bar Lego and Kapla can hold the attention of my little ones for longer than a week or so, but so far so good. Time for a trip to the shops. I suddenly itch for some wool, and a punnik spool. Perfectly pointless.
Posted by Karien at 02:38