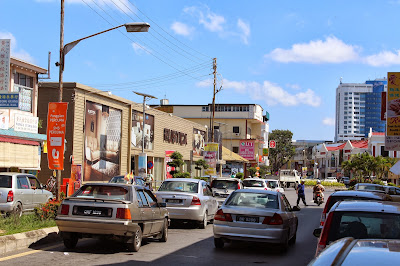 My dad’s confident statement that he can find his way to our hotel proves optimistic. Still, from all of us he seems the least astounded by Miri’s metamorphosis, having been back several times since we left. My mum, on the other hand, looks completely blank. ‘I don’t feel like I have been here before,’ she exclaims. Looking at the map, she is excited to discover a few familiar street names. ‘I remember the first traffic light in Sarawak being build,’ she cries. ‘Right there, on the corner of the Pujut Road.’

In the early eighties of the last century Miri, a town in Sarawak, the Malaysian state that takes up most of Northern Borneo, was a sleepy village. The oil boom, both fossil and palm, together with extensive wood logging has been responsible for its explosive growth. Not exactly a metropolis yet, Miri is now a sprawling provincial town of 300 000 inhabitants. Being just across the sea in Singapore, I have been dreaming of revisiting my childhood memories, which I collected in a children’s book a few years back. Since I was only seven when we left, and I am hoping my parents can guide me on this trip down memory lane.

The first morning we head off to find our old house. We lived in a ‘camp’, a housing estate supplied by the oil company that my father worked for. Rumour has it the whole area will be torn down by the end of the year, so this is our last chance. When we cross the river to Piasau Camp my mother sighs with relief. Finally, she recognises something. The river is covered by two bridges; the old wooden narrow one that would only take one vehicle, so people had to take turns, is now restricted to pedestrians. A large, concrete new bridge flanks it. Inside the camp with it’s simple layout it is not long before we find the house. Our house. Easy, it is the last one in the street, just before the road ends and the beach starts. The first thing we notice is how overgrown everything is. We were the first people to inhabit this house, and the garden was empty. My mother, who is a keen gardener, transformed it into a paradise full of flowers. Now, the abandoned house has a neglected jungle for a garden, and the little dike and the sea beyond it are no longer visible. 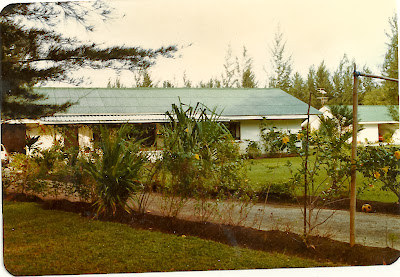 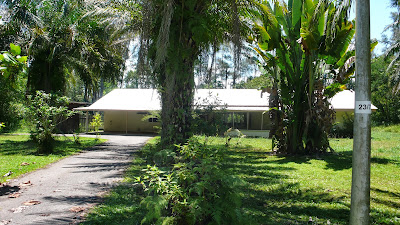 There are more differences. The roof is no longer green, but off-white. From our row of casuarina trees, of which I still have the scar to prove I fell out of when I spotted a snake, only one is left, two are reduced to stumps. The broad patio looks less inviting than it used to, covered in mosquito netting, but is probably the more comfortable for it. 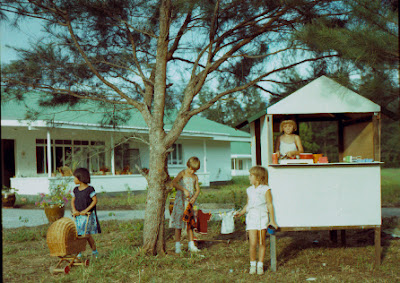 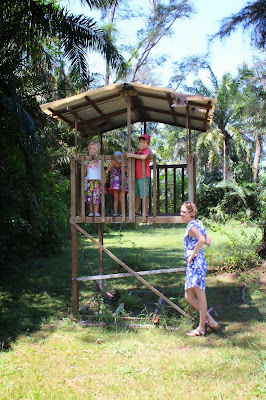 Other things are unchanged. The smell of the sea mixed with jungle green. The playhouse, which we can pretend is the same as the one I used to play in with my brother and sister. The white tiles on the floor. The sound of cicadas. 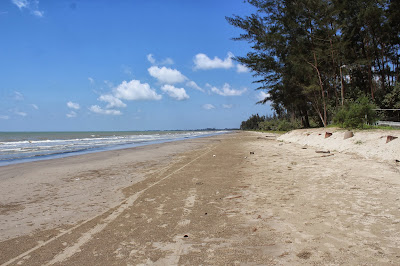 To get to the beach we have to wade a muddy track, cross a dilapidated bridge, but then, it is as fabulous as ever. The kids run around, and I am jealous of my own five-year-old self, fortunate to live in such a beautiful place.

After this first morning we explored further, and found many of my childhood’s favourite places and stories. Stories I will write down and share, I hope, shortly. Stories of the hornbills in Piasau Camp, the waterfalls in Lambir Hills, the search for Iban longhouses and Sarawak laksa.
Posted by Karien at 02:06