Power to the princess!

Yesterday a little girl turned three. A very special occasion, off course, and a princess party was requested, o yes, and a puppet show. Since mama is not too mean a mummy, she complied, grudgingly, but readily. However, there are limits. There is just so much pink and sweetness this mama can handle. So when it came to the puppet show, and the story line, she decided that all those disney stories were just not exactly what little girls needed in the twenty-first century. So she wrote her own. And, just in case you have a birthday coming up soon, of a little girl in need of some princess glitter, I'll share it with you. In hope we can reach all those little girls out there and show them what a real princess is made of! 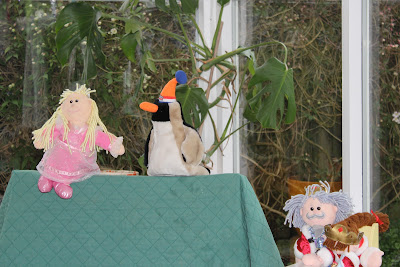 The princess that did not want to marry

Once upon a time, in a country far, far away, lived a princess. Her name was Linde. She had long, blond hair, and eyes dark as coal. She had beautiful dresses, and her favourite one was pink.

Linde: Hello children, how nice to see so many of you. Are you having a birthday party? Who’s birthday is it? It is my birthday too today, did you know? Tonight we will have a fabulous ball, right here, in the palace. We will dance all night. I love dancing, it is my absolute favourite. Do you like dancing too?
But, do you know what is so stupid? My parents, the king and queen, they want me to marry. With a prince. A real prince. In a minute a lot of princes will come and visit, and I have to pick one to open the ball with tonight, dance the first dance. Yuk. I am sure they will all be horrid. I do not want to marry. I want to dance, and play. I do not want to be queen. Then I’ll have to do bow for people all day, and wave from the golden carriage, and be nice, and formal and stiff. No!

Queen comes up: Come on Linde, the princes have arrived. Let me see your hair, and your face, is it clean? Hurry up, and stand straight, dear.

The king and queen sit on the throne. One by one the princes are presented. First, a young boy in a football outfit comes up, running about.

Football Prince: Oi, princess! Got a ball, or something to shoot about? Nah. Come and see my big game tomorrow. You can sit in the stalls, be beautiful, smile and wave at me!

Linde, angrily: I do NOT like football. And I don’t want to sit, be beautiful and wave. I want to dance. And play in the wood, with sticks.

Linde, angrily: What a terrible prince. He has no manners at all. He acts just like a monkey!

Prince Penguin bows, ‘good afternoon princess. How do you do?’

Prince Penguin: Sweet princess, you are so pretty. I would love to take you to my Ice Palace, with it’s winding towers of sparkling blue. We can slip and slide down the stairs and have so much fun.

Linde: No. I do not like blue. Slipping and sliding will ruin my dress. And most of all, I do not want a palace made of ice. Ice should be ice cream, three scoops in a bowl, with a cherry on top. No. I won’t marry him. No!
Linde shouts: I will never marry, do you hear me? I won’t. Tonight I will dance with my friends. Or, even better. I will dance with a frog. That will show them. Pfft (blows raspberry) I don’t want some poncey prince. I am going to the woods, and I will play with sticks and get very dirty.

Linde, in the woods, with a stick: I told you, I won’t marry those stupid princes. A snobby footballer, who just wants me as his trophy? Or a crazy monkey? Or that ice penguin with his frozen palace? You wouldn’t want that either, would you? I don’t want to marry anyway; I don’t want to be queen. I’ll have to make stiff bows, wave from the golden carriage, and sit still and straight, and host dinners. No. I won’t do it. I want to always stay a princess, and dance all day and play in the woods. And when I grow up, I want to decide what I’ll be. Maybe a doctor. Or a pilot. Or the king. Yes, that would be good, because everyone would have to do as I say. Yes, don’t you agree, being king is be best.

Linde: Look a frog. I will take him to the dance, that will show my parents. Hello frog, would you like to dance? Linde and the frog dance and play.

Linde: Children, do you know what I am thinking? Frogs are often enchanted, aren’t they? He could be a prince? What do you think, shall I kiss him?
Unsure: No, maybe I shouldn’t. He is very green, and very slimy.
The children encourage her to do it anyway, and what do you think! The frog turns into a handsome prince. The prince gives Linde a big hug and a kiss. He seems very happy, and then retreats.

Prince charming: Thank you, princess, for kissing me. Very decent of you. But. I suppose I have to marry you now? He looks at the children. That is the proper thing for a prince to do, isn’t it, when a princess kisses him back from being a frog?

Linde: Actually, I’d rather you didn’t. I don’t want to marry at all. I do not wish to be queen, and bow, and wave from the golden carriage, and sit still and stiffly. I want to run in the woods and play with sticks. And when I grow up I want to be what I choose. Pilot, or doctor.

Prince charming: Oh, I love playing with sticks! And I don’t want to marry either, at least not yet. Let’s be friends, and always do what we want.

Linde: Yes! And can I then be king when we are bigger?

Prince charming: Well, we’ll have to see about that.

Linde: All right. But, one more thing. Would you mind dancing the first dance with me at my birthday ball tonight?

Prince charming: I’d be honoured to. I love to dance!

Together they dance away.
Posted by Karien at 03:50